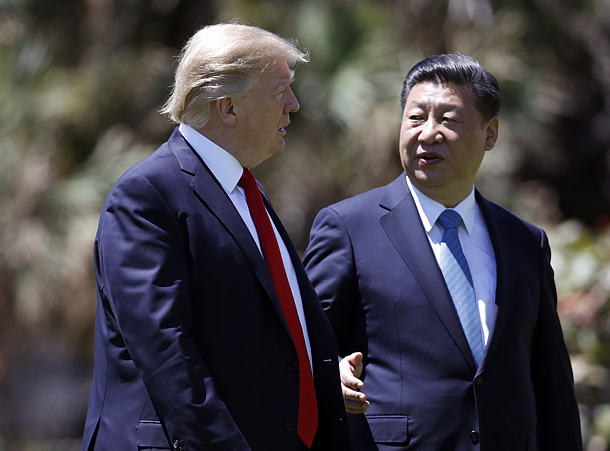 In this April 7, 2017 file photo, President Donald Trump, left, and Chinese President Xi Jinping walk together after their meetings at Mar-a-Lago, in Palm Beach, Fla. [AP/YONHAP]

China appears to be preparing measures in case North Korea tests a nuclear device or performs another provocation, including possibly suspending oil to the regime.

And relations between Beijing and Pyongyang seem frostier than ever before.

Analysts think there’s a high likelihood of a provocation on the 85th anniversary of the founding of the North Korean People's Army next Tuesday and the days leading up to the South Korean presidential election on May 9.

It reported that it was unclear if North Korea did not conduct a sixth nuclear test on Saturday, the founding of the Worker’s Party anniversary, because of Beijing’s warning not to do so. China believes there is the “highest possibility” of a nuclear test on April 25, but “does not leave out the possibility it might take action in early May,” Boxun News said.

South Korean officials confirmed that Wu, China’s top nuclear envoy, during a visit to Seoul last week said he proposed to visit Pyongyang in person to persuade the North to refrain from further provocations. But he was spurned.

Lu Chao, a Chinese expert on Korean studies at the Liaoning Academy of Social Sciences, was among multiple analysts that told the state-affiliated tabloid Global Times Tuesday that if North Korea did not refrain from conducting its sixth nuclear test, it would “definitely trigger” more intense United Nations sanctions, and that China will implement them.

Victor Cha, the Korea Chair at the Washington-based Center for Strategic and International Studies (CSIS), said the “provocation window” between South Korean elections and North Korean provocations has become narrower over time, referring to database collected over the past 60 years.

That window is the closeness in time between a South Korean election and a provocative act by North Korea, meaning a nuclear or missile test.

Cha said such a pattern “suggests a provocation as early as two weeks” before the South Korean presidential elections on May 9. That two-week window overlaps with North Korea’s military foundation day on April 25.

Amid escalated military tension in the region, the Chinese navy tested its new guided-missile destroyer, the Xining, in its first live-fire exercise conducted in the Yellow Sea, near the Korean Peninsula, broadcast on China’s state-run CCTV on Tuesday.

The Xining, China’s indigenous Type 052D-class guided-missile destroyer with new anti-aircraft and anti-missile weaponry and air defense and anti-submarine warfare capabilities, was put into service by the People's Liberation Army Navy in January.

The exercise, possibly warning against a North Korean military provocation, was reported to have lasted several days and comes as Beijing has called for North Korea to give up its nuclear ambitions under renewed pressure from the Trump administration.

U.S. Vice President Mike Pence warned Monday in Seoul the “era for strategic patience is over.”

Trump has been lauding Beijing for helping with the Pyongyang situation, especially over sending back North Korean vessels bringing coal to a Chinese port.

Trump told Fox News Tuesday in reference to Chinese President Xi Jinping, "He's working so nicely that many coal ships have been sent back. Fuel is being sent back. They're not dealing the same way. Nobody's ever seen it like that.”

In February, China announced it would suspend all coal imports from North Korea to the end of the year in accordance with a UN Security Council resolution.

The Chinese Foreign Ministry Wednesday warned Pyongyang to exercise restraint on any actions that could heighten tension on the Korean Peninsula in response to Pyongyang’s recent bellicose rhetoric.

Lu Kang, a spokesman of the ministry, said at a briefing, “China objects to any words that could heighten tensions since the current situation on the Korean Peninsula is highly complicated and sensitive.”

Within China, there is talk about playing a key card to pressure North Korea – cutting off oil supplies to the Kim Jong-un regime.

In an editorial last week, the state-run tabloid Global Times said that if Pyongyang engaged in further provocations, Chinese society would approve of “severe restrictive measures that have never been seen before, such as restricting oil imports to the North.”

On Monday, the paper again called for China to cut off most oil supplies to North Korea if there was another nuclear test.

In an editorial Tuesday, it pointed out that China and U.S. cooperation is increasing over the North Korean problem, and that the possibility of dragging out the North Korea issue indefinitely has “decreased drastically.”

“North Korea and China are a blood alliance, interdependent like no other,” said a South Korean government official Tuesday. “But the atmosphere in China, which has left a back door open to North Korea regardless of the international community’s sanctions, is changing little by little.”

North Korea depends on China for some 90 percent of its crude oil supply.

Lee Gee-dong, head of the Strategic Team on North Korea at the Seoul-based Institute for National Security Strategy, said, “Though it may not be immediate, if North Korea conducts a strategic provocation such as a sixth nuclear test or launches an intercontinental ballistic missile (ICBM), Beijing will have to use the halting of oil exports card.”

However, some analysts think the threat of cutting oil supplies to the North is mere rhetoric.

“In the 1990s, when the North Korea nuclear issue first escalated, China could have blocked oil then,” one former South Korean official said. “The oil supply card could be a performance by China to impress President Trump, but bears more watching.”