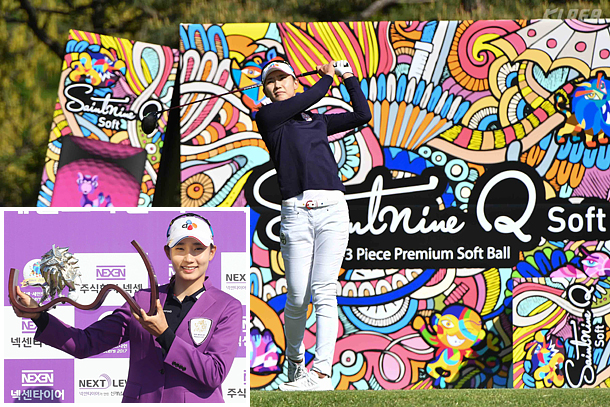 Kim Min-sun hits her teeshot on the 18th hole during the final round of the Nexen-Saint Nine Masters 2017 at Gaya Country Club in Gimhae, South Gyeongsang, on Sunday. Kim captured her fourth career victory and first of the 2017 season, inset. [YONHAP, KLPGA]

Kim shot four under-par on the final day to finish three shots ahead of Bae Seon-woo, runner-up. Prior to the final round, the two were tied for the lead by two shots. However, during the final round, Bae struggled to shoot another low round, leading her to finish runner-up for the second time this season.

While Bae made a bogey on the sixth hole, Kim made additional birdies on the fifth and seventh hole to widen the gap to three shots with Bae in the front nine.

On the 15th hole, Bae was given an opportunity to catch up to Kim when she hit her teeshot into the fairway bunker, having to layup on the fairway. However, after Kim hit her second shot out of the bunker, she stuck her third shot, 100 yards shot, close to the pin to successfully make an up and down for a par.

On the 16th hole, Bae made a birdie to get as close to two shots behind Kim but with a bogey on the 17th hole, Kim was declared the champion maintaining her three-shots lead.

Bae, a fifth-year professional on the KLPGA tour, again came up short of winning her third tournament. At the first tournament of the KLPGA tour, the SGF67 World Ladies Championship with SBS at Mission Hills Golf Club Haikou in March, Bae finished runner-up after losing in the second playoff hole against Kim Hae-rym.

On the other side, Kim, who made her KLPGA tour debut in 2014, has been a consistent player throughout her career by winning a tournament each year.

Although she won her first tournament in her rookie season, it was a late victory, winning the second-to-last tournament of the 2014 season, the ADT CAPS Championship 2014, in November.

Kim was named one of the big-three super rookies along with Baek Kyu-jung and Ko Jin-young and managed to finish 11th on the money list her first year.

Aside from winning a tournament each year, Kim has shown consistency in money ranking and scoring average. After her rookie season, she had been maintaining a scoring average of 71.64 and 71.16 while finishing seventh and eighth in the money ranking.

Other than the top finishers in the tournament, Park Min-ji, who won the 2017 Samchunli Together Open last weekend, had a poor showing, finishing tied for 62nd place at 11 over-par. Kim Hae-rym, SGF67 World Ladies Championships with SBS champion, finished third at six under-par.

Up next, the KLPGA tour players will be teeing off at the KG Edaily Ladies Open with KFC at Sunning Point Country Club in Yongin starting on April 28.