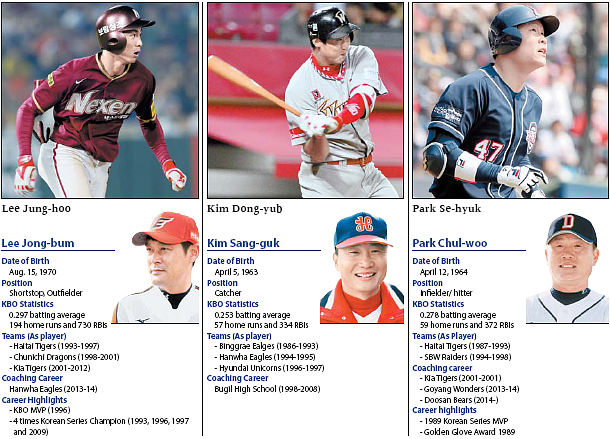 Of the 614 baseball players registered in the Korea Baseball Organization (KBO), ten of them are the sons of former KBO players. Unlike in previous seasons, they are receiving attention not because of the name of their father, but for their outstanding play in the 2017 KBO season so far.

One of them is 2017 rookie Lee Jung-hoo, who just recently graduated from high school. He was in the Heroes’ starting lineup in the game against the Lotte Giants over the weekend, playing left field and batting first.

Prior to starting his career in the KBO, Lee Jung-hoo received the most attention due to the success of his father’s career.

Lee Jong-bum, former shortstop and outfielder for the Kia Tigers, was known as the “son of wind” throughout his career for his speed.

Lee Jong-bum was drafted first in 1993 by the Haitai Tigers. His son, Lee Jung-hoo was also drafted first by the Heroes in June 2016. With that, the two became the first father-son duo to be picked first in the KBO rookie draft.

So far this season, Lee Jung-hoo is meeting high expectations, currently holding a 0.295 batting average which includes two home runs and nine RBIs. Against the Giants on Saturday, Lee Jung-hoo produced a hit off of Park Se-woong’s fork ball at the end of sixth.

Kim Dong-yub, batting clean-up for the SK Wyverns, is the son of Kim Sang-guk, catcher for the Binggrae Eagles and the Hyundai Unicorns. Kim Dong-yub, who was known for his powerful hits throughout his amateur career, signed with the Chicago Cubs and left for the United States after graduating high school in 2008.

After injury, he decided to return to Korea in 2013, and three years later, Kim Dong-yub was selected by the Wyverns in the ninth round during the second 2016 KBO rookie draft.

Now, Kim Dong-yub is the Wyverns’ fourth hitter in the lineup, getting recognized by their new manager, Trey Hillman.

On the Doosan Bears, a father and son both play major roles for the team. Park Chul-woo is a batting coach for the squad, while his son, Park Se-hyuk, is behind the plate as the catcher for the team. Park Se-hyuk was drafted by the Doosan Bears in 2012 and his father joined the Bears as a coach towards the end of the 2014 season. After completing his military service, Park Se-hyuk became the Bears’ back-up catcher last season. This season, he has 0.467 batting average in 13 games, including two home runs and seven RBIs.

To many rookie players, being called “someone’s son” is overwhelming. To uphold their father’s reputation, they often work harder than others.

Frequently, Lee Jung-hoo holds night training sessions after games. When he doesn’t produce hits in a game, he can be quite hard on himself.

It is more of a burden for Park Se-hyuk since his father is on the same team as a coach.

Some tend to think that Park is given more opportunities because of the unique situation. Because of this, he tries to work harder than anyone else and as a result, Park Se-hyuk was named the MVP at the Miyazaki Spring Camp last year.

“It’s a challenge we have to overcome as second-generation baseball players,” Park Se-hyuk said.

Kim Dong-yub makes sure to always have good manners, to avoid people thinking that he thinks highly of himself for having a father who was once a famous KBO player.

This stress affects not only the sons, but also the fathers, who also get anxious about their sons having to play in the KBO with such high expectations.

Lee Jong-bum, who is a commentator for MBC Sports Plus, can make harsh comments about Lee Jung-hoo when he makes mistakes during the game. Although he seems scary or cold at times, he never gets angry at his son.

“I want Jung-hoo to be better than me and would rather be known as ‘Lee Jung-hoo’s father’ than as a famous baseball player,” Lee Jong-bum said.