David Baldacci’s ‘The Fix’ is a compelling puzzler

David Baldacci’s ‘The Fix’ is a compelling puzzler 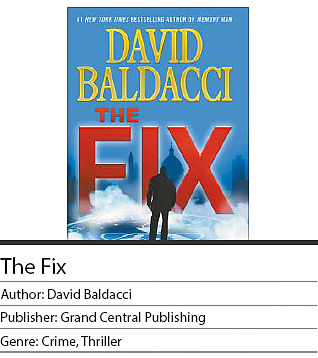 “The Fix,” the latest in David Baldacci’s series featuring Detective Amos Decker - the man who cannot forget anything - is a compelling puzzler.

Baldacci has the ability to tell a story that at first glance seems simple, but quickly becomes complex. Decker and his team are outside FBI headquarters when he witnesses a violent act: A man casually walks up to a woman and shoots her before turning the gun on himself. There appears to be no reason for the crime, and the initial investigation reveals that the shooter and the victim didn’t know each other.

To make it even more confusing, the man was a successful businessman with no history of violence. The woman was a substitute teacher who volunteered at a hospice.

Neither the FBI nor Decker’s ability to rerun the entire scene in his mind provides any answers. When Harper Brown, an agent from the Defense Intelligence Agency, shows up, she demands that they forget about the case. That’s the last thing Decker can do, and it propels him to dig even deeper.

Soon Brown and Decker are forced to work together to stop a potential threat that could destroy countless lives.

“The Fix” unfolds like a classic mystery, but what keeps the pages turning is Decker. He cannot grasp social nuances, making him a mixture of Walter from the TV series “Scorpion” and Sheldon from “The Big Bang Theory.”

Baldacci is a truly gifted storyteller, and this novel is a perfect “fix” for the thriller aficionado.