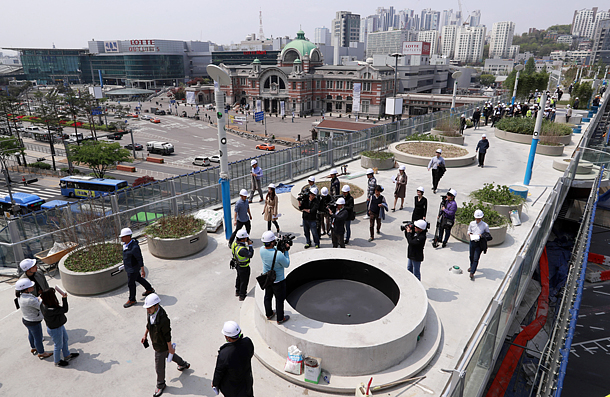 Reporters on Tuesday are invited to take a preview of Seoullo 7017, an overpass near Seoul Station that is being refurbished into a walkway park, which will open to the public on May 20. [YONHAP]

The overpass walkway above the Seoul Station, or Seoullo 7017, is ready to be opened to the public on May 20, the Seoul city government announced on Tuesday.

“The overpass above Seoul Station, which used to pose a safety risk as a dilapidated structure, has been reborn into an overpass walkway, completely safe to earthquakes and able to endure up to 50,000 people at a time,” said Kim Jun-ki, head of the Safety Headquarters of the Seoul Metropolitan Government in a press conference on Tuesday. “The safety level of the overpass has been upgraded from Level D to Level B [on a range of A to E, with A being the safest], after we have input 40 percent of our budget into strengthening the overpass walkways’ safety.”

The name Seoullo 7017 is derived from two Korean expressions, “[going] to Seoul” and “Seoul Road,” which are both pronounced “Seoullo,” and 7017 is derived from the fact that the overpass was originally built in 1970 and renovated into a walkway in 2017, connecting 17 pedestrian roads in the area.

Winy Maas, the Dutch designer of the overpass, had suggested “Botanic Bridge” as the name of the walkway, but the Seoul city government, after holding various public bids, decided on Seoullo 7017 as the new name of the 1.7 kilometer (1 mile) overpass.

The city spent 59.7 billion won ($53.1 million) on turning the elevated highway into a walkway that connects 17 pedestrian roads on the east and west sides of Seoul Station, stretching from Toegye-ro and Namdaemun Market on the eastern end to Manri-dong and Jungnim-dong on the western end. The overpass will strictly be a pedestrian walkway and no bikes or motorbikes will be allowed.

“The railings are much higher compared to other international examples, such as the 1.1-meter high railings of the High Line Park in New York, or 1.2-meter high glass railings of the glass bridge some 300 meters above the Zhangjiajie National Park in China,” Kim said. “Additionally, we placed 29 CCTV cameras and 33 emergency call buttons on the overpass walkway, and we will be monitoring the walkway 24/7 with 16 guards.”

The Seoul Metropolitan Government said the overpass will be off limits in times of natural or man-made disasters. It will also limit the number of people who can use it to 5,000 at a time.

The guards will monitor any demonstrations on the overpass, or possible suicide attempts, and discourage the homeless from lingering on the overpass. Those who chuck objects down from the overpass will be fined, the city government said.

As Winy Maas had intended the overpass walkway to be filled with trees and flowers during the day and “flooded with blue light” during the night, the overpass will hold 24,085 trees and flowers of 228 species in cement pots, whose bottom will be lit in different colors at night. They will be cared for by some 60 volunteer gardeners. There will be 111 multipurpose poles installed on the overpass to provide light and Wi-Fi services, and CCTV cameras, emergency call buttons, speakers and solar panels will also be attached to these poles.

The overpass will also hold five cafes and small restaurants, two stages, one exhibition center, two trampolines (with a 2.5-meter high mesh railing around them), and one puppet show station. “We have 25 days left now before the opening, and until that time we will be finishing up the construction of the Manri-dong Square on the western end of the overpass, where artists will be able to hold concerts or exhibitions in this space that used to a be a run-down parking lot for garbage trucks,” said Ohn Soo-jin, official of the Green Seoul Bureau overlooking the management of the overpass walkway. “The overpass project is 93 percent done at this point.”

The opening ceremony of the Seoullo 7017 will be held in the evening of May 20, with some lighting ceremonies, open stage talk by participants and choir performances.

The Seoullo 7017 will be holding some 20 cultural and arts festivals and exhibitions from May 20 to June 18, including a global fair led by some members of the European Union, including the Netherlands, Germany, France and Spain from June 3 to 4; book fairs and poetry readings; and farmers’ markets and a walkathon.