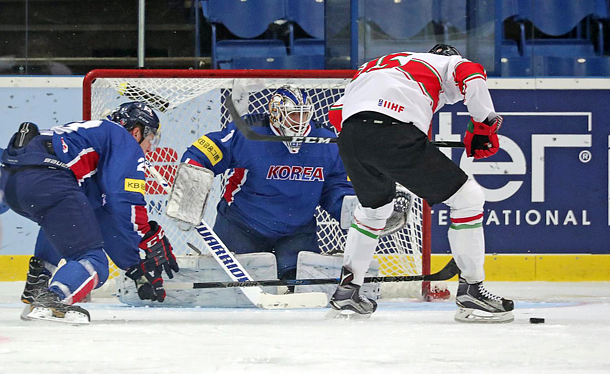 Matt Dalton, goaltender for the Korean national ice hockey team, makes a save on Hungary at the International Ice Hockey Federation World Championship Division I Group A at Palace of Sports in Kiev, Ukraine on Tuesday. [YONHAP]

The Korean men’s ice hockey team, ranked 23rd in the world, continues to exceed expectations and maintain the top spot in the group by defeating Hungary, ranked 19th in the world, 3-1 at the International Ice Hockey Federation (IIHF) World Championship Division I Group A at Palace of Sports in Kiev, Ukraine, on Tuesday.

Just like its game against Kazakhstan, the team had another come-from-behind victory and improved its all-time record against Hungary to three wins, one tie and 12 losses. In the Group, Korea has now extended its lead with three wins and nine points, three points ahead of Austria. Also, Korea is the only undefeated team in the group.

“It was a great game, with two hockey teams battling really hard and a better end for us,” Jim Paek, head coach for the Korean ice hockey team, said during an interview with IIHF.com after the game.

After a scoreless first period, Korea allowed Hungary to take the lead with Daniel Koger’s goal three minutes 45 seconds into the second period. But shortly after, Ahn Jin-hui attempted a shot but Kim Sang-wook rebounded and passed it to Kim Ki-sung to score a goal for a 1-1 tie at 15 minutes 43 seconds, allowing him to score in three consecutive games.

While Hungary was losing, they had an empty-net play, having an additional player by taking out a goalie, but Matt Dalton, goalie for the Korean ice hockey team, only allowed one goal to Hungary, blocking 22 of the 23 attempted shots throughout the game.

With that, through three games at the World Championship, Dalton recorded a 1.67 Goals Against Average (GAA) and 0.946 Save Percentages (SVP).

In hockey, unlike football, the goalie is actively involved in more than 60 percent of the game, meaning Dalton has become a significant player in leading Korea to another win.

“We were fully prepared for them to come out strong,” Shin Sang-hoon said during the interview after the game with IIHF.com. “We want people to see us and to look forward to our development and our bright future.”

With only two more games remaining in the tournament, if the Korean ice hockey team wins one more game either against Austria, ranked 18th in the world, or Ukraine, ranked 21st, then they will be promoted to the IIHF’s top division, IIHF Ice Hockey World Championship, where they will get a chance to compete against the World’s best, including Canada and the United States.