Recall of cars with defects rejected by Hyundai, Kia

Recall of cars with defects rejected by Hyundai, Kia 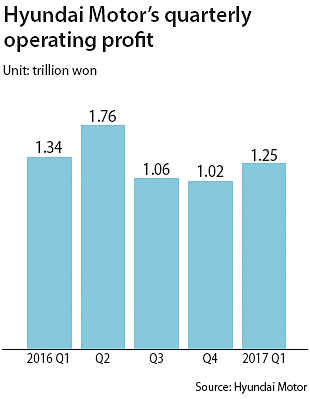 Hyundai Motor was asked to recall cars by the transport ministry - and for the first time said no.

The Ministry of Land, Infrastructure, and Transport asked Hyundai Motor to voluntarily recall cars because of five potential safety issues, including the Sonata LF model, a Sonata hybrid and an unspecified Genesis model, because of defects related to the parking brakes. The transport ministry found that a dashboard light signifying the parking brake was on didn’t work, which could lead to people driving with the parking brake on.

A Hyundai Motor spokesperson said, “The matter is not crucially related to the drivers’ safety,” and so the company is refusing the voluntary recall.

Another four cases include an Avante model that was found to have defects in its vacuum hose; Kia Motors’ Mohave SUV, which had loose hub nuts, allowing the driveshaft to come loose; and Genesis and Equus models because of a defect in their pollution control systems.

“We are not saying ‘no’ to the government’s order but are just proceeding with a legal step that we think is necessary in this case,” a Hyundai Motor spokesperson said.

“Hyundai Motor objected to all five,” an official at the transport ministry said. “It is the first time that a carmaker filed an objection to a government recall request,” the official added.

The transport ministry is going to hold a hearing after 10 days to get Hyundai Motor’s side of the story. If it is not convinced by its argument, it will force it and sister company Kia to recall the cars.

The five defects were among 32 reported by a former Hyundai Motor employee surnamed Kim to the transport ministry and the media last year. The whistle-blower worked in Hyundai Motor’s quality control department.

Kim also claimed that the Theta 2 engine in such models as the Grandeur and Sonata had defects that could lead to an abrupt halting of the engines. He said the cars with the problematic engines had been recalled in the U.S. market but not in Korea. Hyundai Motor denied his claims, saying the defect was caused in the manufacturing process, which differed for cars sold here and abroad.

Kim was fired for leaking confidential information and may face criminal charges.

Korea’s transport ministry started investigating the models in question on Kim’s request last year and concluded the engines did have defects. It ordered Hyundai Motor and Kia Motors to make voluntary recalls early this month. The two carmakers recalled 170,000 units of models equipped with Theta 2 engines.

“This is the first time that a hearing is being held for recall issues. So at the moment we cannot really predict whether the recall will be carried out or be cancelled,” the ministry official said.

Hyundai Motor also announced its first quarter operating profit on Wednesday, which dropped 6.8 percent year-on-year to 1.25 trillion won, largely due to faltering sales in China due to diplomatic tensions and the cost of the recalls.

Chinese sales dropped 14.4 percent year-on-year, and 196,119 cars were sold there in the first quarter. The recall of the Theta 2 engine-equipped vehicles caused a one-time expense of 200 billion won, the company said.

Hyundai Motor sold 1.08 million cars during the Jan.-March period globally, which was a 1.6 percent drop compared to the same period last year.

“Negative sentiment in China led to a sales decrease,” a company spokesman said. “We will try to flexibly respond to local market conditions.”