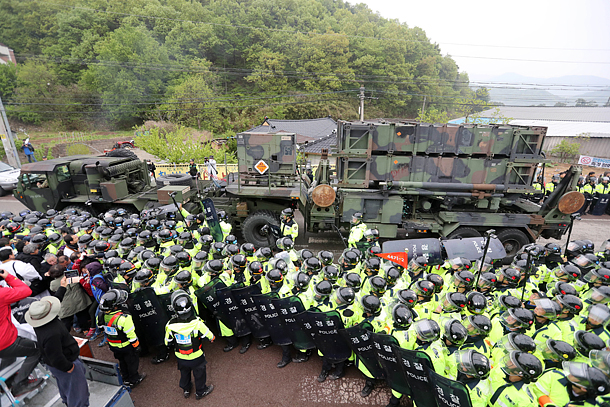 In the dead of night, the military hauled in components of the U.S.-made Thaad battery, including a powerful AN/TPY-2 radar system and at least two missile launchers and interceptors used in them, to a golf course it acquired from Lotte Group and turned over to the U.S. Forces Korea.

The process began around 4:40 a.m. and continued to around 7 a.m. as some 20 military trucks and trailers arrived at the Seongju site, transferring the Thaad components, along with generators and coolers.

News of the installation leaked and hundreds of Seongju residents, activists and members of religious sects gathered in the town center of Soseong-ri, Chojeon-myeon, near the golf course.

Some 8,000 police were dispatched to the scene. They stood guard as the military trucks rolled in. Troops blocked roads to let the military vehicles pass and pushed back the residents and out-of-town protesters.

Protesters held pickets and banners lambasting the Thaad deployment and calling for peace – and asking if U.S. troops were true friends of Korea.

Police were reported to have yanked protesters by the arms and some ended up in a hospital.

Altercations between police and local protesters resulted in at least a dozen people injured, including the elderly. Injuries included fractured ribs and wrists.

Most of the police were dispersed before 8 a.m., after the installation of the equipment was completed.

The furtive relocation of the equipment from a U.S. base to the golf course came earlier than anticipated and ahead of the upcoming presidential elections on May 9. Full environmental inspections have not yet been completed on the site.

This installation came 51 days after the first components of the Thaad battery, including two mobile launchers, arrived in Korea in early March, and six days after the government transferred the land to U.S. Forces Korea.

The South Korean National Defense Ministry Wednesday confirmed the placement of the components and said that the partial installation of the Thaad system was meant “to prioritize securing operational capability” to defend against nuclear and missile threats from North Korea.

“Other processes such as environmental evaluation and site construction will proceed normally, and our military will achieve the Thaad system’s complete operational capability by the end of the year.”

The U.S Department of Defense said in a statement that it is working with the Republic of Korea “to complete the deployment of Thaad, a defensive weapons system, to the ROK as soon as feasible,” without elaborating on any specifics.

“Deploying Thaad is a critical measure to defend the ROK people and alliance forces against North Korean missile threats, as highlighted by the recent ballistic missile launches by North Korea,” it continued.

Stating that North Korean weapons pose “a clear, grave threat to U.S. national security,” the Pentagon pointed out that Pyongyang “openly states that its ballistic missiles are intended to deliver nuclear weapons to strike cities in the United States, the Republic of Korea, and Japan.”

Observers view the installation of the Thaad battery as being nearly complete.

A Thaad battery typically consists of six truck-mounted launchers, 48 interceptors (eight per launcher), a fire control and communications unit, and the powerful AN/TPY-2, or X-band, radar.

Seoul and Washington agreed last July to deploy the Thaad battery in South Korea over fierce opposition by Beijing and Moscow.

The government initially decided on an artillery base in Seongsan, Seongju County, as the optimum location for it but had to seek a new option after a backlash from residents of the small rural town, best known for its melons.

Seongju residents were especially concerned over risks to health and agricultural produce by the electromagnetic radiation produced by the powerful X-band radar. They were also concerned that the town would become a target for North Korean retaliation.

After another review, the Defense Ministry decided upon Lotte Skyhill Seongju Country Club on Sept. 30 as the new home for the Thaad battery. The ministry on Nov. 16 agreed on a land swap deal with Lotte International, and Lotte’s board of directors approved the deal at the end of February. It effectively swapped its Seongju golf course for government land in Namyangju, Gyeonggi.

China has engaged in economic retaliation against Seoul to protest the deployment of the Thaad battery in Korea, which it says goes against its national strategic interests.

Beijing has been especially concerned that Thaad’s powerful X-band radar could be used to spy on it, though Washington has said the scope of the radar would be limited to defending against North Korea.

On March 6, two missile launchers and other equipment arrived on a U.S. Air Force C-17 Globemaster III cargo aircraft at the Osan Air Base in Pyeongtaek.

Local farmers, civic organizations and religious sects, including Won Buddhists, continued peaceful rallies throughout the day, protesting the furtive deployment, the violence by police and violation of the residents’ rights.

“The government unilaterally moving the Thaad battery at dawn, two weeks before elections, shows its intention to secure its deployment before a change in government,” Seo Chang-ho, an activist with civic organization Solidarity for Human Rights, told the JoongAng Ilbo. “Deploying a weapons system that creates tensions with powerful countries in the region without even gaining a consensus from society is a big threat to peace on the Korean Peninsula.”

Park Kwang-on, spokesman for presidential frontrunner Moon Jae-in of the liberal Democratic Party, lambasted the deployment of the Thaad battery, expressing “strong regret that the delivering of the Thaad ignored public opinion and due process.”

“The equipment was moved in first, ignoring the fact that the environmental evaluation was not even completed as well as the protests of the people,” said Park. “The delivery should be halted even now, and the next administration should ultimately decide on this issue.”

The Thaad deployment issue was a key security topic raised in the presidential debate Tuesday hosted by the JoongAng Ilbo and JTBC. Moon called for the Thaad deployment to be delayed until the next administration is in power. The People’s Party’s Ahn Cheol-soo said that it has to be deployed because of the security situation, while Hong Joon-pyo of the Liberty Korea Party and Bareun Party’s Yoo Seong-min both called for the deployment of Thaad as soon as possible to counter North Korea’s threat.