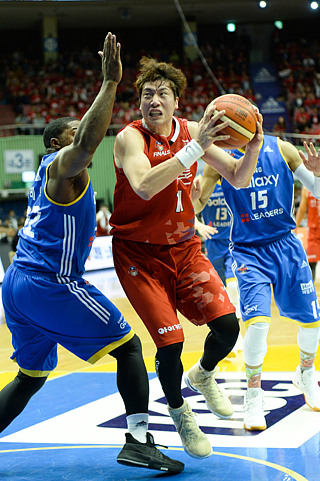 Yang Hee-jong of the Anyang KGC plays during the game against the Seoul Samsung Thunders at Jamsil Arena in southern Seoul on Wednesday. Yang excelled in the fourth quarter to lead the KGC to win its second game against the Thunders. [KBL]

With the win, the KGC takes the lead at two wins and one loss against the Thunders, making them closer to winning the postseason championship trophy.

Unlike the other games where the KGC relied on its “avengers” - David Simon, Keifer Sykes, Oh Se-keun and Lee Jung-hyun - this time, Yang Hee-jong, captain of the KGC, excelled in the fourth quarter to lead the team to a victory.

Yang, who is a defensive player, turned himself into KGC’s scorer in the fourth quarter, scoring eight points. Throughout the game, Yang recorded 13 points with five rebounds and five assists.

“I really wanted to win the third game,” Yang said after the game. “My team didn’t give up and we were mentally prepared for the game.”

Meanwhile, Lee Jung-hyun of the KGC, who was the KBL’s leading scorer in the regular season, was unable to do his best - whenever he had the ball, Thunders fans booed at him.

“I was mentally intimidated but Hee-jong encouraged me throughout the game,” Lee Kwan-hee said.

Even worse, Sykes, one of four starting players for the KGC, did not play in the game due to an ankle injury.

The KGC played a hard game against the Thunders, and was behind by 11 points at one point in the third quarter.

“Yang sets the mood of the team well,” Kim Seung-ki, manager of the KGC, said. “He played his best today.”

Aside from Yang, Simon scored 34 points and Oh scored 22 points with 12 rebounds throughout the game. Though the KGC’s other two starting players didn’t perform well, the KGC managed to capture its second win at the Thunder’s arena.

“We are stronger in big games,” Yang said after the game. “We want fans to enjoy watching our game.”

For the Thunders, Ricardo Ratliffee scored 22 points, but he wasn’t able to score any further points in the fourth quarter.

The two teams will play their fourth postseason championship game at Jamsil Arena today at 8 p.m.