Ulsan Hyundai and FC Seoul both knocked out of AFC

Ulsan Hyundai and FC Seoul both knocked out of AFC 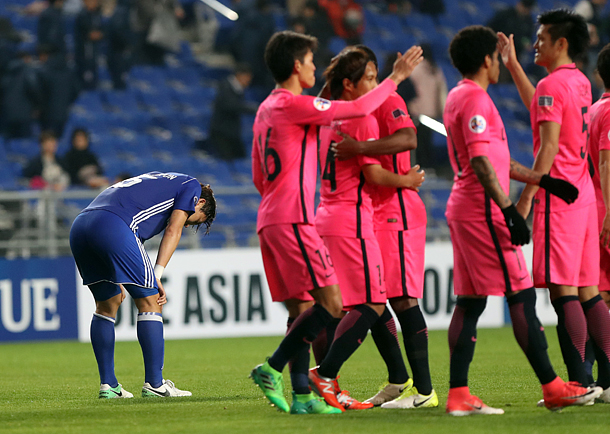 The Kashima Antlers, in pink, celebrate after winning against Ulsan Hyundai FC in the AFC Champions League Group E match at Munsu Football Stadium in Ulsan on Wednesday. [YONHAP]

Ulsan Hyundai were blanked 4-0 by Japanese side Kashima Antlers in their Group E contest at home, while FC Seoul fell 4-2 to Chinese outfit Shanghai SIPG in their Group F match. Both K League Classic clubs needed a victory to keep their hopes alive for the last 16, but failed to execute the mission.

Korean fans will now have to count on Suwon Samsung Bluewings and Jeju United, the two other clubs that still have a chance to qualify for the round of 16.

Ulsan surrendered all four goals in the second half at Munsu Football Stadium and picked up their third defeat in Group E, where they also compete against Brisbane Roar and Muangthong United.

The latest loss handed Ulsan an early AFC Champions League (ACL) exit regardless of their final match against Brisbane next month. Only the top two clubs from each group can advance to the round of 16.

With only one match remaining, Ulsan are stuck on four points, but Kashima improved to eight points with their latest victory. Muangthong already had eight points just after four matches.

Ulsan, the 2012 ACL champions, threatened Kashima’s net from the start thanks to Mislav Orsic. The Croatian attacker first fired a left-footed shot from the left side of the box in the eighth minute, which went just inches wide of the right post. Five minutes later, Orsic met Kim In-sung’s cross from right flank, but his attempt went straight to Kashima’s Korean goalkeeper Kwoun Sun-tae.

Kashima tested Ulsan goalkeeper Kim Yong-dae with Ryota Nagaki’s strike from a distance in the 35th. In the 43rd, Shuto Yamamoto headed down Nagaki’s free kick, but failed to beat the 37-year-old goalkeeper.

But Ulsan’s defense started to fall apart in the second half. Kim saved Shoma Doi’s strike in the 52nd, but Kanazaki Mu made it 1-0 with a follow-up attempt. Two minutes later, Kashima doubled the lead after Pedro Junior’s left-footed strike beat Kim.

Mu then further punished Ulsan with his second goal of the match following a mistake from Kim. In the 67th, Ulsan center back Jung Seung-hyun made a back pass to Kim, but the goalkeeper’s mishit clearance landed on Mu, who struck with his right foot to give a comfortable three-goal cushion for Kashima.

Desperate for goals, Ulsan put forward Lee Jong-ho and Ivan Kovacec, but both failed to make big impact. In the 81st, Kim Seung-jun met a Lee Yeong-jae cross, only to miss the target.

Kashima, the defending J League champions, weren’t done for the night as Leo Silva unleashed a right-footed shot from a distance in the 90th for a 4-0 lead. Ulsan had three minutes of added time, but failed to unlock Kashima’s defense.’

Later Wednesday, defending K League champions FC Seoul failed to hold on to their early lead against Shanghai on the road.

Seoul stunned Shanghai just 10 minutes into the match when Brazilian attacker Maurinho found the back of net. But the Chinese hosts leveled the score with their Brazilian forward Hulk, whose powerful left-footed cannon beat Seoul goalkeeper Yoo Hyun in the 25th.

Seoul finally gave up the lead to Shanghai in the 30th when Zhang Wei found the back of net with his left foot effort. In the 43rd, the hosts made it 3-1 with Wu Lei’s header.

In the second half, Seoul tried to get back into the match with Park Chu-young. The former AS Monaco and Arsenal man hit the left post with his left-footed attempt in the 65th, and in the 70th, Park finally cut the deficit to one when he slotted home Yun Il-lok’s low cross.

With the latest defeat, Seoul, the 2016 ACL semifinalists, have just three points from five matches in Group F. Hwang Sun-hong’s side, along with Western Sydney Wanderers, will not get out of the group stage, regardless of their final match against Urawa Red Diamonds next month.