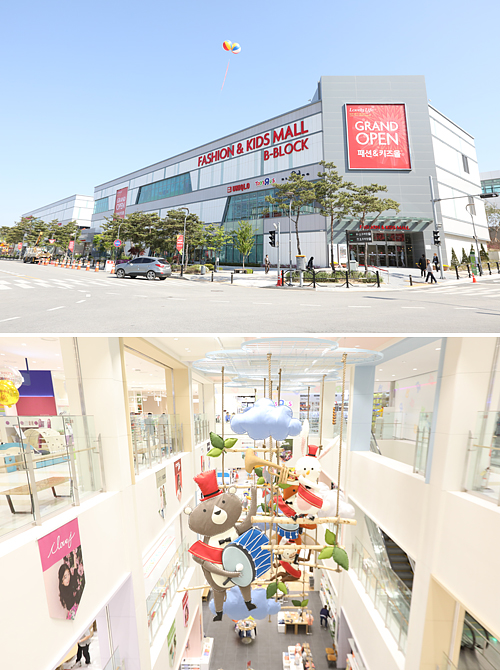 Lotte Premium Outlets has opened a three-story complex catering to families with children at its Icheon location. There are cafes with ball pits and slides and themed play zones where kids can experience different jobs. [LOTTE DEPARTMENT STORE]

ICHEON, Gyeonggi - The renovated branch of Lotte Premium Outlets in this suburban city about 30 miles south of Seoul looks more like an amusement park than a shopping mall for bargain hunting.

At its Icheon outlet location, Lotte has opened a three-story complex catering to families with children. There are cafes with ball pits and slides, job experience zones where kids can pretend to be doctors and firefighters, and a large Toys ”R” Us store that anchors it all.

“The Icheon branch is not just for shopping but also for outdoor activities for families,” said Lee Chung-yeol, store director at the Icheon outlet, during a press preview on Thursday.

Since opening the location in 2013, Lotte found that 75 percent of visitors were in their 30s and 40s. That’s 6 percentage points higher than the share of people who visit other outlet branches outside Seoul. The company figured that more shops and facilities for family visitors, especially kids, be better for customers.

Another factor was the growing popularity of children’s products in Korea. Between 2012 and 2016, the industry’s revenue expanded from 27 trillion won ($24 billion) to 39 trillion won.

A good portion of the outlet’s new building is dedicated to play. On the third floor, a job experience zone lets kids experience diverse occupations, from veterinarian to firefighter and even urban planner. There is a fee - 22,000 won for kids between 5 and 13 and an extra 4,000 won for an accompanying adult - but there is no limit on time.

In another play space, called Doctor Balance, children can test their physical strength, including muscle endurance and responsiveness, on playground sets that resemble gym equipment.

Next to the job experience zone is a Toys “R” Us. Lotte is the Korean operator of the U.S.-based toy store, but so far, it’s only installed stores in its supermarket chain Lotte Mart.

The location in the Icheon outlet is the first time Lotte is running a Toys “R” Us outside the mart. An outlet spokesman said the toy store will have about 6,000 products.

The building’s second floor has more shopping areas, but even they’re dedicated to kids. Outdoor brands Nepa and Blackyak, for instance, are selling swimsuits and backpacks for children. Out of 47 brands in the new space, 32 are specifically kids’ brands, according to Lotte.

There’s something for the parents, too. Various fast fashion brands, including Uniqlo and Topten, have set up shop, and automaker BMW has opened one of its Motorrad cafes where car aficionados can enjoy coffee while browsing BMW-themed apparel.

Lotte Premium Outlets’ Icheon location holds the title of biggest outlet in Asia with a floor space of 53,000 square meters (570,000 square feet). An average 15,000 people visit daily, and it has generated 1.2 trillion won in revenue since opening.

The company expects the new Fashion & Kids Mall building to boost the number of visitors by 20 percent.