This year’s Children’s Day could be most profitable ever

This year’s Children’s Day could be most profitable ever 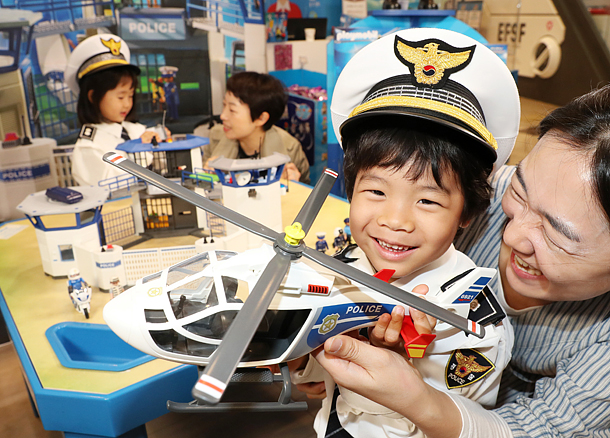 A boy plays with police-themed toys at the Playmobil store in Yongsan I’Park Mall in central Seoul on April 20, as the store promotes toys ahead of Children’s Day on May 5. [YONHAP]

Retailers are pulling out the stops to profit from one of Korea’s most lucrative national holidays: Children’s Day.

Falling on May 5, the holiday was first celebrated in 1927 to remind people of children’s crucial part of the country’s future. Today, it is a school holiday and an excuse for parents to give their kids gifts.

For retailers, it is always a big business opportunity. And this year’s Children’s Day is more promising than the norm as it comes in the middle of an unusual nine-day holiday composed of two national holidays, a weekend and a presidential election - which boosts family outings and their overall consumption.

To gain early momentum, some discount chains and e-commerce sites have launched toy discounts and promotions earlier than the usual last week of April.

E-Mart, for example, held a four-day “early bird” sale between April 20 and 23 on Lego’s popular Star Wars and Friends series with a 50 percent discount. Lego is one of the most popular presents for Children’s Day, appealing to both boys and girls.

“This year’s Children’s Day falls in the middle of a long holiday, so we expected there would be parents coming to buy presents well before the holidays start,” said Kim Sung-ho, the head of E-Mart’s toy department. On Thursday, E-Mart launched its main toy discount period with a focus on products associated with animated films.

Toys related to animated films and television series are a major trend in Korea’s toy market. For example, Lotte Mart’s top 10 toys sold between April 1 and 16 were inspired by “Turning Mecard W,” “Hello Carbot” and “Dinocore” - animations for boys that aired last month. For girls, doll brands like Mimi and Jouju are steady sellers along with products associated with the television cartoons “Kongsuni” and “SofyRuby.”

Other retailers are also offering cartoon character products at discounts.

Lotte Mart, the local partner of the global franchise Toys “R” Us, will offer products exclusive to its Toys “R” Us stores tied to “Turning Mecard W” and “Sylvanian Families” through May 9. During the same period, it will cut 5 percent off the original price of toys priced over 50,000 won ($43.96) from renowned domestic brands Bandai, Sonokong and Mimi.

Rival Homeplus is also offering major toy discounts until May 10. Apart from character toys, Homeplus exclusively sells Carrie’s toys for girls. Carrie was a YouTube star well-known among Korean children for her lively reviews of newly released toys. Products sold under her name are very popular among girls. Homeplus’ line-up also includes bikes, roller skates and protection gear sold at discounts of up to 20 percent.

Department stores are attempting a new strategy to attract children and their families during the long holiday.

Hyundai Department Store doubled the number of cultural events at its stores in May. The Mokdong branch will present the children’s musical “Beauty and the Beast” in May 5. It will also organize a character parade inside the Pangyo branch between May 1 and May 5 that will feature characters like Robocar Poli and Ebichu.

Galleria will offer Kakao Friends’ dolls to any customer who makes purchases of at least 150,000 won with a Galleria card or loyalty card between May 3 and 5. The Galleria Timeworld branch in Daejeon will offer free hand painting and craft sessions to make canvas bags.

Hotels are getting in on the game too.

JW Marriott Hotel Seoul is offering a kind of scavenger hunt for kid guests. A guest will receive a quiz mission sheet at check-in and if he or she accomplishes 10 of the 15 tasks before check out, a lucky draw with gift coupons and movie tickets will be offered.

The Grand Hyatt Hotel Seoul is offering a “camping package” that includes children’s programs through May 2 to May 7. From May 3 to 6, the hotel will run a playroom filled with Edtoy’s wooden blocks. It will run a make-up room for girls between May 3 and 7.

The Westin Chosun will organize a patissier program just for kids on May 5 and 6 in which children will decorate mini cakes. Its “Playground” stay package includes tickets for the Pixar Animation exhibit in Dongdaemun Design Plaza.

“We devised the programs so children can spend a memorable time with their family during the holidays,” said manager Lee Eun-bi, who devised the events for Children’s Day.