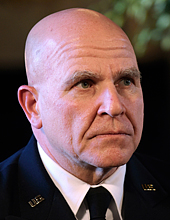 A rift has emerged between Seoul and Washington on who will pay for the expensive antimissile defense system the United States recently installed in Korea, as the national security chiefs of the two countries failed to straighten out their conflict over the bill.

Kim Kwan-jin, chief of the National Security Office of the Blue House, had a telephone conversation with White House National Security Adviser Gen. H.R. McMaster on Sunday about the controversy concerning the Terminal High Altitude Area Defense (Thaad) and its $1 billion operational cost. Shortly after key components of the Thaad battery were installed in Seongju, North Gyeongsang, last week, U.S. President Donald Trump said he wants Korea to foot the bill for the deployment, an abrupt change from the original arrangement that the U.S. military will cover the operational costs, while Korea will provide the site and necessary infrastructure.

“What I told our South Korean counterpart is until any renegotiation, that the deals in place, we’ll adhere to our word,” McMaster told Fox News Sunday.

U.S. Vice President Mike Pence also said in an interview with NBC that Seoul will be asked to pay up.

“Look, the president has been very clear, whether it’s our allies in Europe or South Korea or Japan or other countries, we expect countries around world to do more,” Pence said. “And whether it’s this missile defense system or other systems, I think you can be confident that the president of the United States will call on prosperous nations that the United States provides security for to do more in their own defense.”

A diplomatic source well-informed about the White House told the JoongAng Ilbo that the pressure to pay for the bill was anticipated. “In private conversations, Trump has often said Korea must pay for the Thaad,” said the source. “But we didn’t know he would make a public demand right at this particular point.”

Another official said the demand has an intention. He said Trump probably raised the issue now in order to include the Thaad bill when the two countries negotiate for their defense cost sharing plan. In 2014, Seoul and Washington struck a five-year cost-sharing plan for 28,500 U.S. troops in Korea. Under the plan, Korea pays about 920 billion won ($807 million) of the annual cost.

The current agreement will expire in 2018, and Seoul and Washington are expected to begin negotiations in the coming months.

The Trump administration’s demand for the Thaad bill is a serious blow to Korea, which has been subject to protests by China and Russia against the deployment. Complaining that the system’s powerful radar will undermine its security interests, Beijing took economic retaliation against Korea, including instituting a ban on group tourism.

It is not the first U.S. argument for Korea to pay more for American military deployments to counter the North’s threats. In a 2014 report, the Congressional Research Service argued that Korea should be asked to pay part of the cost needed to increase the U.S. military presence in Guam because it is to counter the North’s nuclear and missile threats.

Concerns were also raised that a more serious rupture will be created between Seoul and Washington.

If a liberal candidate wins the May 9 presidential election in Korea, and if the incoming administration uses an engagement policy toward the North, Trump will likely question the effectiveness of the Korea-U.S. alliance, said Larry Niksch, a senior associate at Center for Strategic and International Studies in Washington. Niksch said the Trump administration may even demand partial or complete withdrawal of U.S. forces from Korea.

As the controversy continued to swirl, Foreign Minister Yun Byung-se said Monday that he had met with U.S. Secretary of State Rex Tillerson and clearly explained the history of the Thaad discussions between Seoul and Washington and conveyed Seoul’s position. “Tillerson is aware of the sensitivity of the issue and he said he will discuss it with the concerned offices,” said Yun.

Yun also said the main point of the conversation between Kim and McMaster was to assure that the two countries will respect the existing agreement.

The Ministry of National Defense said Monday there will be no renegotiation on who will pay for the Thaad bill. “The issue is already agreed between Korea and the United States,” said Moon Sang-gyun, spokesman for the ministry. “It is also clearly stated in the Status of Forces Agreement [SOFA].”

The bilateral SOFA, signed in 1966, governs the legal status of U.S. military personnel stationed in Korea. Under the agreement, the U.S. bears all expenditures incident to the maintenance of its armed forces in Korea. Korea is required to pay for the use of facilities and land the U.S. troops utilize.