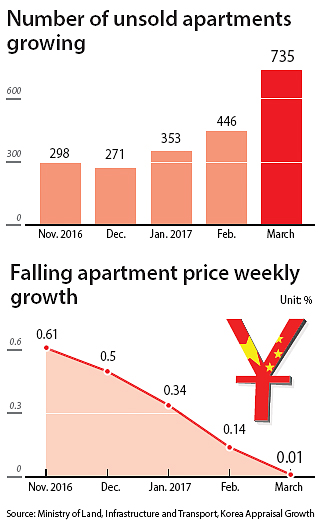 The real estate market on Jeju Island has never been hotter than it was last year, and new apartments were the most fiercely fought over.

Some 239 units came on the market at Haemoro Rich Hill development in Donam-dong, Jeju City, last November. There was an average of 130 potential buyers for every unit. The most popular units saw 212 bids.

For the entire island, each new apartment coming on the market had an average of 100 potential buyers.

In 2016, the average price of an apartment rose more than 7 percent compared to the year before, the highest rise in all of Korea.

Ordinary people were looking for lodgings along with investors interested in Jeju’s real estate market thanks to favorable economic trends and such developments as the government’s plan to build a second airport.

A few months later, the heat is definitely off - and some apartment developments are struggling to find buyers. The number of unsold apartments is rising and apartment values are falling.

According to the Korea Financial Telecommunications & Clearing Institute, among the 10 apartment complexes that have started accepting preconstruction sales bids, none have succeeded in attracting more buyers than the number of units being built.

Only 28 buyers have applied for units in Jeju Hamdeok Hamil Town, located in Jocheon-eup in Jeju City, which started accepting applications last month. That is exactly half of the 56 units on sale.

Another apartment complex in the same neighborhood started accepting preconstruction sale offers in March, 123 Town. It has failed to attract a single offer for any of its 46 units. And 123 Town is offering relatively small apartments - 85 square-meters (914 square-feet) or less - which have been most popular in recent years.

The number of unsold apartments on Jeju has risen for the first three months of this year.

These areas go under government surveillance and management and a more rigorous approval process is applied for construction permits.

“Because there is a need to reduce the supply of apartments, it will be harder to get construction permits in Jeju,” said Kim Seong-oh, head of an evaluation team at the government housing and urban guarantee agency.

Sales of already built apartments have been falling as well.

According to the Ministry of Land, Infrastructure and Transport, 2,933 apartment units were sold in the first quarter, a 17.8 percent drop from the same period a year ago.

Prices only rose half a percent in the first quarter, according to the Korea Appraisal Board, compared to 5 percent a year earlier.

“This year apartment owners have been putting their apartments up for sale but there hasn’t been many buyers,” said a local realtor in Jeju.

Analysts say the rapid cooling of Jeju’s real estate market is largely caused by a significant drop in Chinese investors in the wake of the controversy surrounding the installation of a U.S. antimissile defense system and economic retaliation by Beijing.

“The biggest reason is the drop of Chinese investors, which have been major players in Jeju real estate investment,” said Yang Ji-young, an official at Real Today, a real estate information provider.

The rapid rise in real estate prices in a short period of time is another reason for the cooling off. Jeju apartment prices have risen 26 percent in the last three years, much sharper than the 7.3 percent national average.

“Because of the unfavorable situation including a drop in Chinese tourist [in protest of the anti-missile system being set up on the Peninsula], the number of unsold apartments will likely grow while apartment price growth will significantly shrink,” said Park Hap-soo, KB Kookmin Bank’s senior real estate analyst.