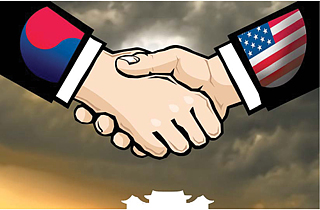 The new South Korean president will come into office when the country faces unprecedented challenges on both the domestic and international fronts. He will go straight to work without the usual transition period to draw up short and mid-term plans for his administration. Moreover, Korean society is still divided between the pro- and anti-impeachment forces. Our security is suffering from its worst post-war vulnerability due to the escalated nuclear and missile threats from North Korea and the utterly inexperienced and totally unpredictable nature of the new U.S. administration under President Donald Trump.

The workload is heavy for the incoming president. Atop his list of things to do must be a summit with Trump to reconfirm the unwavering traditional alliance and build up some mutual trust with an American leader who seems to value personal relations more than anything. Second, he must normalize the functioning of our government and motivate public officials to work with conviction and proactive commitment. No good policy is possible when there is little communication among government offices, let along cooperation.

A Korea-U.S. summit is imperative because Trump and the U.S. legislature regard the North Korean nuclear issue as an urgent national security threat and the top issue on the foreign affairs agenda. Trump is a leader with a tendency toward unilateralism, who would not be shy to use military force to protect U.S. national interests. We must not take lightly Trump’s comment that he could consider military action against North Korea to stop its advances in the technology of intercontinental missiles capable of reaching the U.S. mainland.

Very recently, Trump relented on that hard-line stance and said he would be “honored to meet Kim Jong-un.” Considering his self-styled ways and blank-slate ignorance of Northeast Asian issues, he could meet with Kim without any regard for Seoul. Through his first 100 days in office, Trump showed that he regards diplomacy and ties with traditional allies as zero-sum business deals. Given that style, he could advise Seoul not to test the traditional alliance should conflict of interests arise on bilateral issues. It would not be wise to raise the issue of reopening the Kaesong inter-Korean industrial park or resuming Mount Kumgang tours.

In an interview, U.S. Secretary of State Rex Tillerson defined Japan as the U.S. most important ally in East Asia and South Korea as a partner. He may not have had any particular motive for that categorization, but it still can’t be taken lightly. Trump’s sudden demand that Seoul pay for the U.S. Terminal High Altitude Area battery system in Korea together with the issue of renegotiating the Korea-U.S. free trade agreement should be considered the deal-making style of Trump. He likes package deals. With Beijing, he said he wouldn’t worry about the trade deficit if it helped our more with North Korea — a package deal.

The new South Korean leader must hold talks with Trump as soon as possible. He must be thoroughly prepared. Japanese Prime Minister Shinzo Abe and Chinese President Xi Jinping gained a lot from their talks with Trump. The next Korean president must draw assurances on the bilateral relationship from his U.S. counterpart through strong persuasion on how the alliance benefits the U.S. He must come to agreement with Washington on the ramifications on American and South Korean strategic and economic interests from China’s rising influence in the region.

Then the president should reorganize the government to normalize the administration. For the long term, he must start discussions on moving the presidential office and legislature to the administrative city of Sejong. An overhaul of the trade organization also should be part of the reform plan. But the pending issue of renegotiation of the Korea-U.S. FTA cannot wait for reorganization. The president must immediately form an ad hoc committee under the prime minister in charge of coordinating affairs with Washington. The Ministry of Finance and Strategy should be part of the committee to coordinate domestic affairs with other government offices. The first months can test not only the capabilities of the next president, but shape the fate of the country.