Oh Seung-hwan whips in a solid victory over the Braves

Oh Seung-hwan whips in a solid victory over the Braves 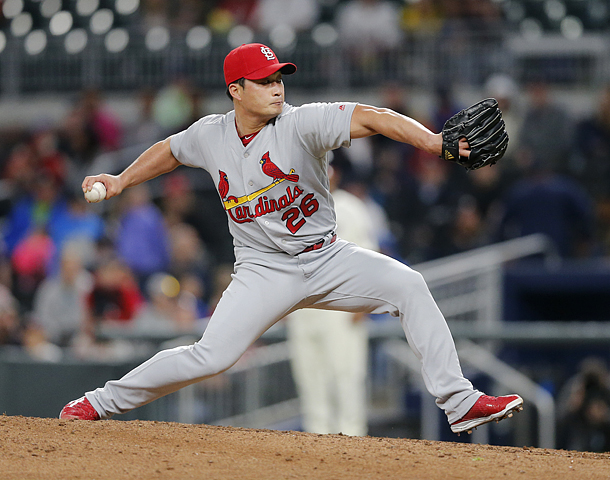 Oh Seung-hwan of the St. Louis Cardinals in the ninth inning during the game against the Atlanta Braves on Saturday. [AP/YONHAP]

Oh Seung-hwan of the St. Louis Cardinals picked up his seventh save of the season against the Atlanta Braves at SunTrust Park in Georgia on Saturday.

Oh made an appearance in the ninth inning while the Cardinals were up 5-3. In one inning, he threw 15 pitches and the highest fastball speed was at 152.4 kilometers (94.7 miles) per hour.

This was Oh’s first appearance since the 7-5 loss against the Milwaukee Brewers on May 1. During the game against the Brewers, Oh allowed a three-run homer by Travis Shaw in the tenth inning, recording his first loss of the season. With Shaw’s home run, Oh has given up a total of three home run this season in 13 and a half innings he has pitched in.

While Oh pitched for one-and-a-half innings, he had three unearned runs on two hits while walking one and striking out two.

Oh got off to a slow start this season, but looking at the speed of his pitches, there hasn’t been much of a difference, as he averaged 150.2 kilometers per hour in 2016.

Since the loss, there had been comments regarding the use of Oh as a closer by Mike Matheny, manager of the Cardinals.

In April, when the Cardinals played against the Pittsburgh Pirates and the Brewers, Oh appeared in five games in one week.

Although he only pitched one inning and picked up saves in all five games, as a closer, it was an overwhelming schedule.

Prior to Oh’s major league debut, Oh played 12 seasons with the Samsung Lions of the Korea Baseball Organization, recording a 1.69 ERA, and one season with the Hanshin Tigers of the Nippon Professional Baseball, recording a 2.25 ERA.

Through his 13 years of baseball, Oh never appeared in five games in a week.

Oh signed a one-year contract with the Cardinals in 2016, with a club option for a second season.

Oh’s second season option was finalized after he pitched in his 30th game on September 9, at $2.75 million.

Meanwhile, Kim Hyun-soo of the Baltimore Orioles has not appeared for three straight games.

Though the Chicago White Sox had a right-handed pitcher, Buck Showalter, manager of the Orioles, chose not to include Kim in the batting line-up on Saturday.

Despite Kim’s absence, the Orioles still managed to win the game 6-5 against the White Sox at Oriole Park at Camden Yards.

And Choo Shin-soo of the Texas Rangers was unable to produce a hit against the Seattle Mariners on Saturday. Choo appeared as the Rangers’ eighth hitter but was not able to produce a run or a hit throughout the game. His batting average fell to 0.237 and the Rangers lost 8-2.