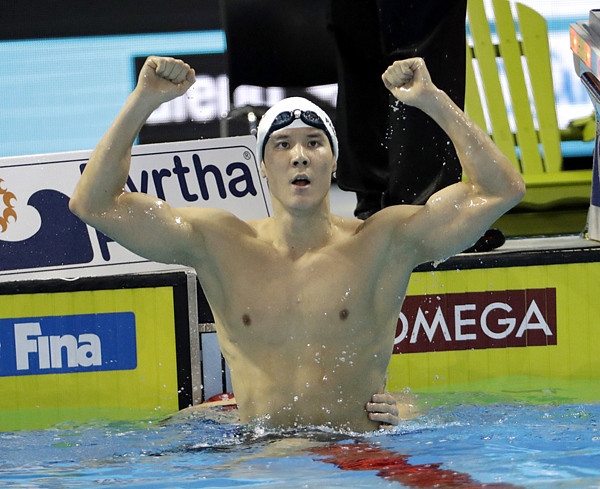 Park Tae-hwan, Olympic swimming gold medalist, got off to a great start of the season, winning three gold medals in men’s 400 meter, 200 meter and 1,500 meter freestyle at Arena Pro Swim Series at McAuley Aquatic Center in Atlanta, Georgia on Sunday.

His time was recorded as the 16th fastest time in the world in 2017. Throughout the race, once Park took the lead in the first 50 meter at 26.95 seconds, he did not allow the lead to other swimmers.

In Canada, Park also won the men’s 400 meter freestyle in short course, where the meets are being held in a 25 meter pool, half the length of an Olympic-sized pool.

Aside from his participation in short course, Park’s most recent event held at the regular length pool was the Asian Swimming Championships in Tokyo last November. In the event, he won the 1,500 meter freestyle with the time of 15:07.86.

Although he had some success in his 2016 season at the short course event, but Park also had some failures, not being able to make it out of the heats in all the events he participated in during the Rio Olympics.

The 2016 season was by far the roughest year for Park, where he had to deal with issues outside of the pool. After testing positive in an anti-doping test, Park was banned eight months by the International Swimming Federation.

Though his ban was lifted in March 2016, he faced another bump on his way to Rio when a regulation set by Korean Sport & Olympic Committee (KSOC) barred him from being on the national team.

The KSOC got rid of the controversial regulation prevented Park from competing in Rio in January, after it came under fire for banning athletes from the national team for three years after having already served a ban by respective international bodies.

The Korea Swimming Federation has said it will recognize times posted by Korean swimmers in overseas meets between May 7 and 15 and will take them into consideration to assemble the national team for the worlds, if athletes are unable to enter the May 12-15 trials in Korea.

Since his time in the 400 meter race was good enough to be under FINA’s “A” qualifying time of 3:48.15, next month, Park will stop in Korea and will be heading to Budapest to race in the FINA World Championship, starting in July.