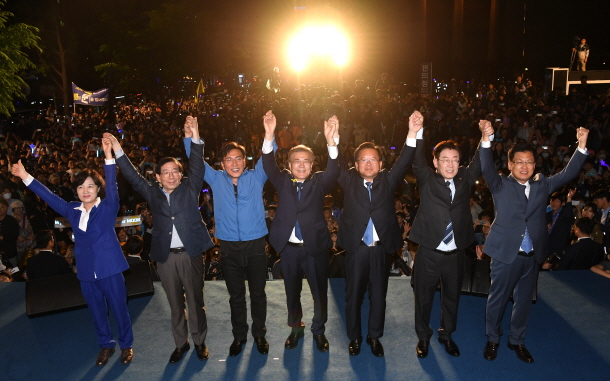 Moon Jae-in, the nominee from the liberal Democratic Party, was elected Korea’s 19th president on Tuesday in what has been seen as an indictment of the country’s conservative establishment.

Moon’s victory in the snap election, which follows the first removal of a democratically elected president, was confirmed by the JoongAng Ilbo at 1:25 a.m. Wednesday morning when 67.15 percent of all votes had been counted.

While about a quarter of all votes cast were yet to be counted as of press time, Moon’s wide gap ahead of his closest rivals was enough for him to declare victory. The liberal candidate led in every region of the country save for the two Gyeongsang provinces and Daegu, considered a traditional stronghold of the conservative Liberty Korea Party (LKP).

In a sign of confidence in his victory, Moon delivered a speech to his supporters gathered at Sejongno Park in central Seoul at around 11:45 p.m. Tuesday. The presumptive president-elect pledged to be a leader for national unity and serve all the people regardless of whom they had voted for in the election.

“Starting tomorrow, I will become a president of all the people,” Moon said before an enthusiastic crowd that continually chanted his name. “I will serve all Koreans, including those who voted and did not vote for me, to be a president of unity. I will make a country that serves justice and the rule of law and where the people’s will triumphs.”

With Moon, a former human rights lawyer who fought military dictatorship in the 1980s, as president, Korea will likely see a leader who stands in sharp contrast to the two previous presidents, Lee Myung-bak and Park Geun-hye, who backed conservative policies, especially regarding North Korea.

Because this year’s election came early to fill the vacancy created by Park’s removal from office, the five-year tenure of the new president will begin as soon as the National Election Commission finalizes the winner this morning. Moon won’t have time to form a transition committee and will immediately take control of the military.

His first official event as president is a scheduled visit to the National Cemetery in Seoul this morning. He will then be sworn into office at the National Assembly and head to the Blue House, the official residence of the Korean president.