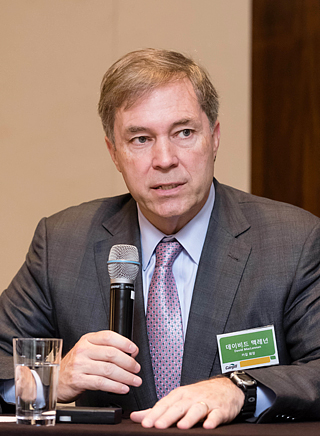 Global feed manufacturer Cargill is looking to increase production in Korea by 68 percent to 2.7 million tons per year in 2025. This would account for 20 percent of all Cargill’s animal feed manufactured worldwide.

The U.S.-based company celebrated its 50th anniversary in the local market on Friday, having established a feed factory in Korea in 1967.

Its Korean subsidiary, Cargill Agri Purina, oversees manufacturing of 1.6 million tons of feed per year. The parent company globally produces around 15 and 17 million tons per year.

“We have deep roots here [in Korea] and we’ve enjoyed a long and successful partnership - this relationship is something we will continue into the future,” Cargill’s Chairman and CEO David MacLennan said at a press conference at the Westin Chosun Hotel on Friday.

Korea is an attractive market for investment, MacLennan said, because of factors like a stable social infrastructure and improved stability in politics after the recent change in government.

In fact, Cargill’s largest feed mill in the world is located in Pyeongtaek, Gyeonggi. The facility is worth $100 million and has the capacity to produce 870,000 tons of animal feed annually.

A private company for 151 years, Cargill has regional offices in more than 70 countries and is one of the biggest animal feed manufacturers in the world. Its big initiatives are sustainability and transparency on food safety.

Apart from establishing a systematic supply chain for safe animal feed, Cargill also provides solutions and expertise to local farmers regarding new technology in agriculture that could enhance sustainability.

Cargill’s executives have spoken against protectionism in the past, asserting that borders should remain open for food to freely flow from areas of surplus to those in need. “Although we are in the early days of the new U.S. administration, so far we have not seen any impact on trade flows and I’m optimistic that it will continue to be the case,” said MacLennan.