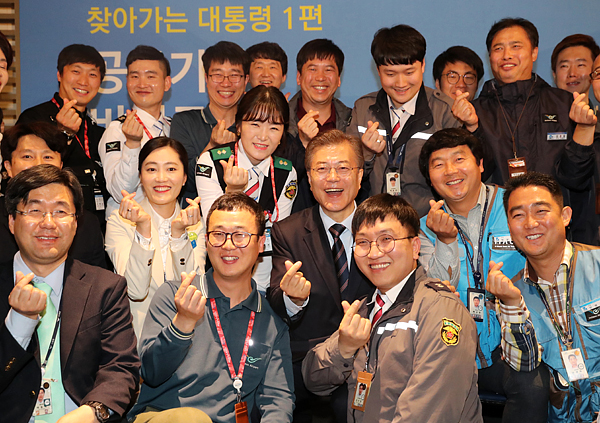 President Moon Jae-in, second from right in the second row, makes a heart sign with his fingers with contract workers at Incheon International Airport on Friday after a meeting on contract employment at the airport. [YONHAP]

President Moon Jae-in vowed to scrap the contract employment system in the public sector during a visit to meet contract workers at Incheon International Airport on Friday, his first presidential visit since he was elected.

“I will open an era that sees an end to contract employment during my presidency,” Moon told the airport’s contract workers at its CIP Lounge on Friday.

“I promised to create 810,000 new jobs in my campaign, and this includes improving job conditions. We will start addressing the contract employment system in the government and public sector.”

Some 10,000 jobs are contracted or subcontracted by the airport, according to CEO Chung Il-young of the Incheon International Airport, one of the highest proportions at a public organization.

Moon has vowed to put more workers on staff at public corporations rather than on contracts, which don’t have the same level of pay, benefits or stability.

“Following the current administration’s task to hire as many workers as salaried workers as possible, we will shift 10,000 contracted or subcontracted workers into salaried positions,” Chung said. “We will also create 30,000 more jobs at the airport and its affiliated organizations by 2020, and a total of 50,000 more jobs by 2025.”

Contract workers, usually on short-term contracts of one to two years, earn 53.5 percent of the monthly wage of salaried workers, according to a study by the Korea Small Business Institute on the income gap between contract and salaried workers last year.

Moon held a meeting with contract workers at the airport, including security guards, janitors, maintenance workers and privately-hired firefighters.

“I have been receiving the same pay for the past 10 years, which is more or less the minimum wage level,” said a security guard who is in his 14th year working at the airport on contract. “Incheon International Airport is the door to Korea and should be managed with strict security but the company responsible for this security changes every three years here.”

“We are the first ones to find objects suspected to be bombs or fire hazards and the first to make reports to security,” said a janitor.

“Yet we are treated like we are invisible, even though we are a big reason why this airport is named No. 1 among airports around the world on surveys.”

“I fight fires just as any government-hired firefighters do,” said a firefighter subcontracted to work at the airport. “Yet because I am hired privately, if I die doing my job, the government will not count that as death on duty.”

One employee even shed tears at the meeting.

“I was overcome with tears at the fact that the president has come to hear our stories,” said a contract employee who works at a security checkpoint. “It’s just that finally, we are beginning to see some hope.”

Listening to their stories, Moon promised to do more in his administration to improve their working conditions.

“I have ordered ministries to investigate the contract employment system of each ministry and to come up with proposals to solve this problem together,” Moon said. “I hope that other public, and even private, organizations will cooperate with enthusiasm.”