People at Seoul Station watch a military spokesperson announcing North Korea’s launch of a missile from the northwest city of Kusong, in North Pyongan Province, that flew 700 kilometers (435 miles), according to the South Korean military. The Sunday missile launch is the North’s first since the Moon Jae-in administration took power on Wednesday. [YONHAP]

The missile test is the first since Moon Jae-in’s inauguration as president of South Korea and his reaction will be closely watched.

The military said the missile was launched from the northwest city of Kusong, in North Pyongan Province, which is about 118 kilometers northwest of Pyongyang, the North Korean capital, and 55 kilometers south of the border with China.

The type of projectile was not immediately known.

North Korea launched 10 ballistic missiles this year in seven tests, the most previous on April 29, nearly 12 hours before a U.S. Navy strike group led by the USS Carl Vinson was to enter South Korea’s East Sea for joint military drills with the South Korean Navy.

The Sunday launch was the first since President Moon kicked off his five-year term in South Korea four days ago, replacing impeached leader Park Geun-hye, who is jailed awaiting a corruption trial. 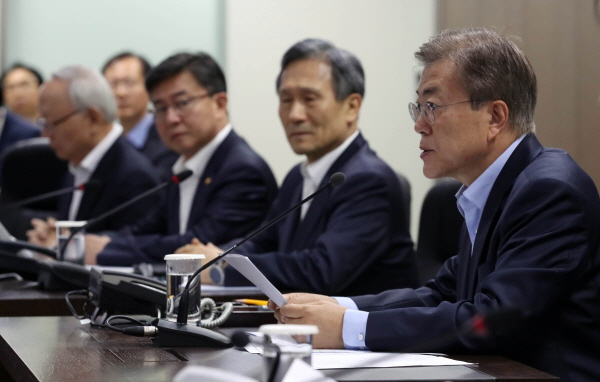 President Moon Jae-in, front, presides over a National Security Council session at the Blue House that began at 8 a.m. and lasted 20 minutes in response to North Korea's missile firing at 5:27 a.m. from North Pyongan Province. It was Pyongyang's first military provocation since Moon was sworn in on Wednesday. [YONHAP]

Moon called the North’s latest provocation a “blatant violation of the UN Security Council resolutions,” which ban Pyongyang from seeking missile technology, and a “grave threat not only to the Korean Peninsula but also to the international security."

The new president condemned the North for carrying out the provocative act “just days after” his administration was inaugurated on May 10.

“As I said before the people, I promised to do all I can to settle peace on the Korean Peninsula,” the president was quoted as saying by Yoon Young-chan, senior presidential press secretary during a press briefing. “Despite my promise, I deeply regret that the North’s reckless provocation came just days after the new administration’s inauguration and at the same time express my grave warning [to Pyongyang to refrain from further provocations],” said the president.