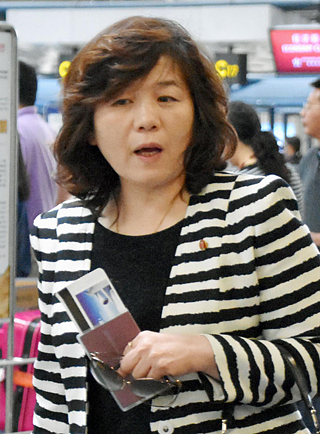 Choe Son-hui at the Beijing Capital International Airport on Saturday on her way back to Pyongyang. [YONHAP]

North Korea’s senior diplomat in charge of North America said Saturday the regime would talk to the Donald Trump administration “if the conditions were right,” apparently responding to Trump’s earlier comment he would be “honored” to talk to North Korean leader Kim Jong-un if the circumstances were right.

It’s the first time North Korea replied to Trump’s suggestion two weeks ago of bilateral dialogue, which White House Press Secretary Sean Spicer later said could occur if North Korea were ever serious about “completely dismantling its nuclear capability and taking away the threat they pose both to the region and to us.”

Choe Son-hui, director general of North American affairs at North Korea’s Foreign Ministry, who made the remark while talking to reporters at the Beijing Capital International Airport, did not specify what preconditions Pyongyang had in mind.

Choe was returning from Oslo, the capital of Norway, with a North Korean delegation after holding talks with former U.S. officials there, the first such dialogue since the start of the Trump administration. The diplomat reportedly departed for Europe through Beijing on May 7 for the so-called Track 1.5, or semi-governmental, semi-civilian discussions.

Choe said she met with Thomas R. Pickering, former U.S. ambassador to the UN, in Oslo, and mainly discussed Pyongyang-Washington relations, without detailing any further.

On South Korea’s new president, Moon Jae-in, and whether Pyongyang was preparing for a bilateral summit with Seoul, Choe said only that the North “would have to see.”

Moon said last Wednesday in an inaugural speech he could hold a summit with North Korea “if circumstances permit.”

“I will act fast to solve the security crisis and work hard for peace on the Korean Peninsula,” he said. “If necessary, I will fly to Washington as well as Beijing and Tokyo. If circumstances permit, I will also make a visit to Pyongyang.”

Suh Hoon, who was nominated by Moon the same day to head the National Intelligence Service, South Korea’s equivalent to the U.S. Central Intelligence Agency, later told reporters that while it was “premature” at this point to discuss an inter-Korea summit, he considered such a meeting “necessary” for the new administration.

“[A summit] could give us a gateway to solve North Korea’s nuclear problem, which is an urgent security threat to us,” said Suh, adding Moon could travel to Pyongyang if the “right conditions” to ease tensions on the peninsula were met.

Moon, from the liberal Democratic Party, is an advocate of former Presidents Kim Dae-jung and Roh Moo-hyun’s Sunshine Policy, or policy of engagement with the North.

In an interview with NBC News last Thursday, Trump admitted Moon was “more open to discussion” with North Korea, but that he wouldn’t mind the two countries engaging in discussion as long as they were “under certain circumstances.”

On whether Moon’s approach could mean a change in his North Korea policy of stepping up sanctions, Trump said he was “going to see what happens.”

Kim Yong-hyun, a North Korean studies professor at Dongguk University in Seoul, said that Trump appeared to be worried Seoul and Washington might not be on the same page in dealing with Pyongyang.

“At a time when the United States has adopted a pressure-first, talks-later stance in dealing with North Korea’s nuclear weapons threat, [Trump] is afraid South Korea might pull the talks-first option out, leading to a cacophony between Seoul and Washington.”