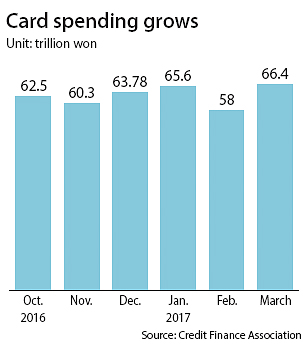 Spending on plastic grew in the double-digits in March, reaching the largest monthly amount since data has been compiled in its current fashion. But the growth was led by spending overseas rather than in Korea.

According to the Credit Finance Association, Korean spent 66.4 trillion won ($59.3) on credit and debit cards in March, 13.7 percent higher than the 58.4 trillion won spent a year earlier, the largest monthly amount ever. The number of card purchases approved by financial companies rose 15.3 percent to 1.46 million.

When breaking it down, credit card spending rose 13.3 percent year-on-year to 52.4 trillion won while spending on debit cards rose at a faster pace of 15.5 percent to 13.9 trillion won.

The Credit Finance Association cited rising consumer prices including higher gas prices and the growth of online shopping as reasons behind the record-level of card spending. But in particular, Koreans were opening up their wallets more aggressively overseas.

In March alone, the number of people who traveled abroad rose 23.6 percent to 1.94 million people.

Starting March 1, which was a holiday celebrating Korea’s independence movement under Japanese colonial rule, some people were able to take a five-day break that month.

As a result, card spending on transportation, which includes air tickets, rose 16.7 percent year-on-year to 1.47 trillion won or 210 billion won more than a year ago.

While Koreans are spending more overseas, the report showed they’ve actually been cutting back at home.

The average amount approved by financial companies in March was 45,622 won, a 2.7 percent drop compared to a year ago. Average approval amounts have been declining since January.

The average approved card spending in 2016 also fell 2.4 percent compared to the year before.

Average approvals on credit cards dipped 1 percent to 58,893 won, while for debit cards approvals fell at a sharper rate of 3.7 percent to 24,388 won.