Park pleads innocent to all 18 charges

Park pleads innocent to all 18 charges 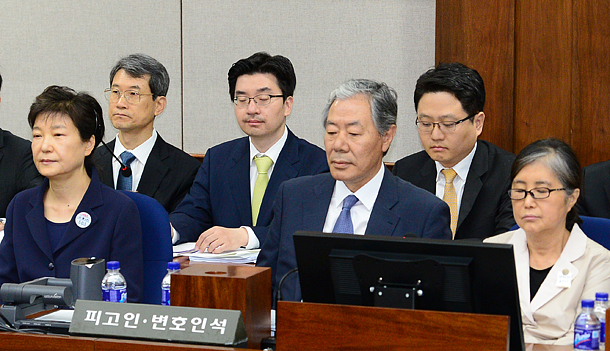 Former President Park Geun-hye, far left, waits at the Seoul Central District Court on Monday for the first hearing in her bribery and abuse of power trial. Her confidante Choi Soon-sil is seated at the far right. It was Park’s first public appearance since she was put into custody on March 31. [YONHAP]

Former President Park Geun-hye denied all charges of abusing power, coercing and receiving bribes and leaking confidential information on the first day of her trial Tuesday, making her first public appearance since she was taken into pre-trial detention 53 days earlier.

Handcuffed, Park arrived at the Seoul Central District Court around 9:10 a.m. for her trial’s first hearing. She wore a dark blue suit and a badge identifying her inmate number - 503 - on her lapel. Her signature swept-up hair style was maintained by odd-looking plastic pins sold at the prison.

Park entered and was received by her lawyer, Yoo Yeong-ha. Choi entered the room next and looked at Park. The former president avoided eye contact with her friend of 40 years. Choi was seated between Park’s lawyer and her lawyer, Lee Kyung-jae.

Lotte Chairman Shin, accused of having offered bribes to Park and Choi, entered the room before the judges came in.

“What is your occupation?” Judge Kim Se-yun asked in the arraignment. Park, the country’s most powerful person until her impeachment in December and removal from office in March, replied, “I don’t have any.” Park was taken into custody in March, shortly after the Constitutional Court permanently ousted her by endorsing the National Assembly’s impeachment. After further investigation, she was indicted in April on 18 charges.

The state accuses Park of strong-arming massive donations from 18 business groups in collusion with Choi and An Chong-bum, a former presidential aide, for two non-profit foundations. She is also accused of receiving bribes from conglomerates. In total, Park is suspected of receiving 59.2 billion won ($52.9 million) in bribes.

She is also accused of abusing her authority to coerce seven companies including Hyundai Motor Group, Lotte, Posco, KT, Samsung and CJ to benefit Choi or to influence their business decisions.

Prosecutors also accuse Park of using her power to orchestrate a government blacklist of artists critical of her administration. She is also accused of illegally influencing appointments made by her government and Hana Bank and leaking confidential government information to Choi.

While Lotte Chairman Shin was arraigned Monday for bribery charges related to Park’s case, Samsung Electronics Vice Chairman Lee Jae-yong was not in the courtroom. His trial began separately in February.

Park is the third former president to face criminal charges in a courtroom. In 1996, former Presidents Chun Doo Hwan and Roh Tae-woo were tried together for their roles in the 1979 military coup and for corruption. All three former presidents were tried in courtroom 417 of the Seoul Central District Court.

The prosecution sent eight prosecutors to the trial. Park was represented by six lawyers. The hearing took three hours.

“A former president being detained and tried in a courtroom could be seen as a moment in an unfortunate history,” said Prosecutor Lee One-seok in his opening statement. “But it also demonstrates the firm establishment of rule of law in which a trial takes place to prove a president’s criminal activities according to the justice system.”

Park’s lawyer, Yoo, denied all 18 charges against Park. “The indictments were made not based on evidence, but based on inference and imagination,” Yoo said.

Yoo said Park had nothing to gain by raising funds for the Mi-R and K-Sports foundations because their money was managed by relevant ministries. He said prosecutors failed to specify in the indictment how Park conspired with Choi.

After Yoo’s opening statement, Judge Kim asked Park if she is denying the charges. “Yes,” she said. “My position is the same as my lawyer’s.”

Asked if she had any additional statement, Park said, “I will in the future.”

Prosecutor Lee made a rebuttal. “We did not indict her based on a political circumstance or [candlelight] vigils,” he said. “Laws, principles, evidence and factual relations are the only things that matter.”