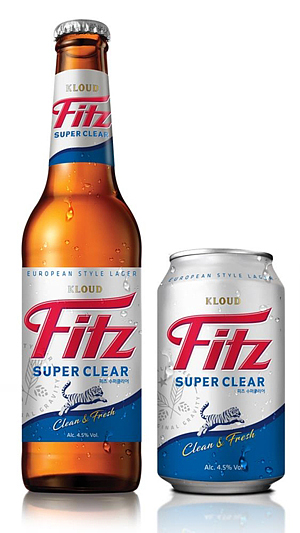 Fitz Super Clear is a lager containing a relatively low 4.5 percent alcohol content. The company said Fitz is designed to serve as a light but refreshing alcoholic drink for the summer.

“Fitz was developed with a focus to resolve a reputation that Korean beer is tasteless and bland,” the company said. “We tried to eliminate the unnecessary taste that is generated when the temperature and ingredients aren’t kept stable during the brewing process.”

The beer uses the same “original gravity” method as Kloud products, which don’t add water in the brewing process. It also used the self-developed Super Yeast and enhanced the fermentation rate to 90 percent for a cleaner taste.

The company launched Kloud in 2014.

Kloud has 5 percent alcohol content and has a flavor similar to imported beers from European countries. It’s sometimes criticized for not being suitable for Korea’s somaek drinking culture, which mixes soju with beer.

Fitz’s target customers are in their 20s and 30s.

“Kloud is for those who enjoy drinking alcohol while Fitz is for general gatherings because it is lighter and contains less alcohol content,” said Lee Jae-hyuk, a food and beverage manager at Lotte.

Lotte Liquor invested 700 billion won ($622.6 million) for a second beer manufacturing plant, which is scheduled to open in July. Once it opens, it will be able to produce up to 200,000 kiloliters (55.8 million gallons) of Fitz per year.