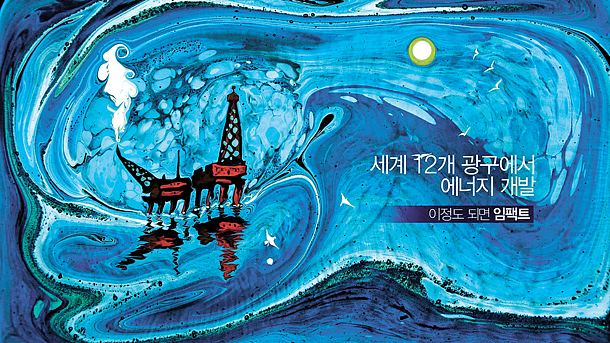 SK Innovation’s latest advertisement features ebru art by Turkish painter Garip Ay and has generated five million views just a month and a half after its release. [SK INNOVATION]

Oil refiner SK Innovation’s latest advertisement in its “Big Picture of Innovation” series, which features unconventional visual artists performing their craft, has generated five million views just a month and a half after its release.

The commercial features Turkish artist Garip Ay, who practices a traditional form of Turkish painting called ebru, in which oil paint is marbled on a water canvas to create extravagant images. It’s a relatively new medium for many Koreans, which is why the company chose to convey its message through Ay’s art.

“It is a successful example of collaboration between art and commerce,” said Han Sang-pil, a communications professor at Hanyang University. “The ad delicately illustrated SK Innovation’s vision and business and used effective words to accompany the paintings.”

The ad campaign included a commercial that aired on television and a print version that was published in newspapers. It was also shared on SK Innovation’s online blog and Facebook page, where views of the video increased exponentially.

“The ad gained much popularity among consumers and artists, especially through social media,” a company spokesperson said.

The advertisement has piqued Koreans’ interest in ebru art. The oil paintings were featured at the Seoul International Handmade Fair earlier this month, and many participants said they found out about the Turkish art form through SK Innovation’s commercial. The commercial has doubled as a bridge between two cultures.

To celebrate the ad’s five million views, SK Innovation is holding a promotional quiz event on its blog and Facebook page.