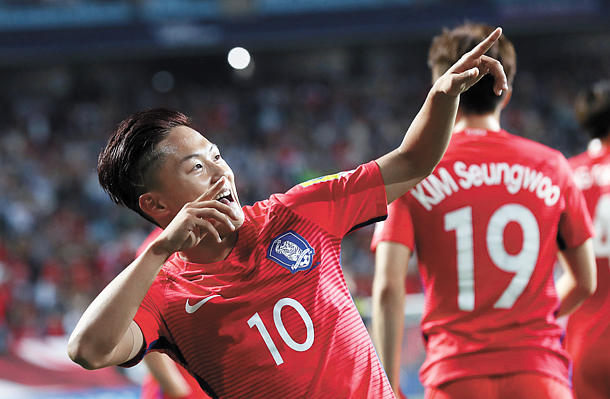 It’s only been a week into the U-20 FIFA World Cup, but Lee Seung-woo is already a super star and is receiving more attention than any other player.

“Since 2013, Catalan Football Federation and FC Barcelona had been urging him to get EU citizenship,” said Park Jung-sun, representative of Team 12. “And they promised to support Lee until he becomes a member of the Spanish national team.”

“I’ve heard about Lee Seung-woo so I’m aware of what he has done for Barcelona and for the Korean national football team,” Diego Maradona said prior to the start of the World Cup in an interview with the Argentine newspaper Infobae. “It’ll be painful for me to watch Lee taking an active role against my country.”

Just as Maradona said, Lee dominated the flow of the game and he and his fellow Barcelona teammate, Paik Seung-ho, are now on the top of the recruiting list.

“I heard about Lee Seung-woo and Paik Seung-ho before the game,” said a scout. “Lee Seung-woo has great talent.”

The main reason behind the Catalan Football Federation’s effort in having Lee on the team is to develop him into a franchise star who can represent the community. The Federation believes that Lee can thrive in Catatonia since he is well aware of the culture from living in Barcelona since age 13.

For Barcelona, Lee’s naturalization is also favorable because each La Liga team is only allowed a maximum of three non-EU players. That said, if Lee earns EU citizenship, the team can recruit an additional international player. But Lee immediately declined the offers to naturalize.

“I’ve never thought of myself playing in the World Cup wearing some other country’s uniform,” Lee said.

Though he declined the offer, Lee has an important decision to make next year. Since his contract with Barcelona will expire next June, many big clubs in the European leagues have visited Korea and started their process of recruiting Lee.

Both Lee and Barcelona are positive about renewing their contract, but other clubs have been continuing their effort to recruit Lee. Other teams are arguing that even if Lee gets promoted to FC Barcelona’s main team within a few years, it’ll be hard for him to be in the lineup since the team has their MSN Trio: Messi, Suarez and Neymar.

The clubs are trying to persuade Lee with a guaranteed spot in their lineups. Aside from the Spanish clubs, other European clubs have shown interest in Lee and Paik.

“Portuguese clubs S.L. Benfica and FC Porto, showed interest in recruiting Lee Seung-woo,” said a scout, who asked not to be named. “Many other clubs in Germany and France were also interested in Lee Seung-woo.”

As for Paik, F.C. Internazionale Milano, which won the Italian league a total of 18 times and the European Champions league three times, has shown interest.

“Among the scouts, Paik Seung-ho is rated as a player with a lot of potential,” said one scout.

Before heading into the round of 16, Korea will face England at Suwon World Cup Stadium today at 8 p.m. Though the result of the game does not affect Korea’s advancing to the next round, it will determine who their opponent will be. Another win will make Korea’s journey to the World Cup easier, as they will be able to play against a third-ranked team from group C, D or E.