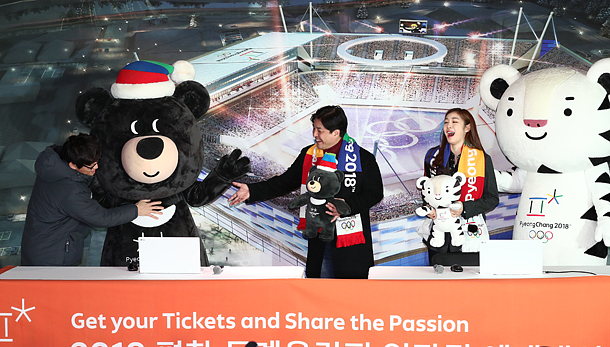 Korea will host the 2018 Winter Olympics next February. The biennial Games are more than just a sporting event; they become prisms through which politics and nationalism are often refracted, and for Korea, this is especially true.
In 1936, Korea’s first gold medalist, Sohn Kee-chung, won the marathon at the Berlin Olympics but was compelled to stand on the medal podium and listen to the Japanese national anthem, as the medals were credited to the Empire of Japan (a Korean also won bronze). In an act of nationalism, Korean newspapers proudly displayed a picture of Sohn, but with an image that removed the Japanese red sun from his uniform.

The 1988 Seoul Olympics is well known as Korea’s “coming out” party. Hosting the world for those two weeks put South Korea’s newfound democracy and its decades of hard work and economic progress on full display. But the event also had geostrategic implications beyond merely a display of Korean pride. The 1988 Olympics came after two successive Cold War boycotts that badly damaged the Olympic spirit. In 1980, President Jimmy Carter announced that the United States would not participate in the Moscow Olympics in protest over the Soviet invasion of Afghanistan. The Soviet Union reciprocated in 1984 by boycotting the Los Angeles Olympics.

This meant that the Seoul Games could go down in history as the Olympics that cemented a tradition of Cold War boycotts, or it could be the Olympics that would break the unnerving trend. Koreans were successful in achieving the latter goal and, in doing so, created one of the most unique examples of successful sports diplomacy.

At the Los Angeles Games, while Soviet athletes did not participate, members of the Soviet International Olympic Committee were present, and the Koreans lobbied hard for them to attend the Seoul Games. South Korea invited the Moscow Philharmonic to perform in Seoul. But in addition to soft power, Seoul used economic incentives under Roh Tae-woo’s “Nordpolitik” to create incentives for trade, investment and aid. Not only did the Soviets participate in the 1988 Games, but these processes also played a role in facilitating the normalization of diplomatic relations in 1990.

In the case of China, Beijing was slated to host the Asian Games that same year. The stakes were high for China because managing a regional Olympics is often seen as a precursor for bidding on the Olympics, which Beijing had ambitions to do. But the Chinese had no prior experience hosting such a major sporting event. While most other countries averred in helping China prepare because of sanctions over the Tiananmen Square massacre the previous year, South Korea stepped forward.

Having just hosted the Seoul Games, they provided the Chinese with useful advice on logistics, advertising revenue and enthusiastic spectators. The goodwill created by these efforts played no small part in Beijing’s eventual decision to normalize political relations with South Korea in 1992 despite angry North Korean protests.

What will be the meaning of the PyeongChang Games? As a sporting event, PyeongChang is undeniably important. Korea will be the first place in Asia outside of Japan where the Winter Games will be held, which speaks to the importance of Asia as a market for the International Olympic Committee to expand winter leisure and competitive sports. The Games will take place only 40 miles from the DMZ in the only province that is bisected by the demarcation line. Unlike the Summer Games, where North Korean athletes are competitive at a world-class level in some sports, it is unlikely that the North will field athletes who could medal, let alone qualify for the winter sports.

But it is possible that the Moon government will seek permission from the International Olympic Committee to permit their participation. And there is always the dark scenario of tensions with the North. In 1988, Pyongyang used terrorists to blow up a civilian airliner before the 1988 Games, and in 2002, the North engaged in lethal exchanges at sea during the 2002 World Cup.

At a time of heightened tensions on the peninsula emanating from North Korea’s WMD threats, one hopes the “Olympic Truce” will be honored by all parties as a period of peace, no matter the geostrategic situation.

*The author is the D.S. Song-KF professor of government and director of Asian Studies at Georgetown University.