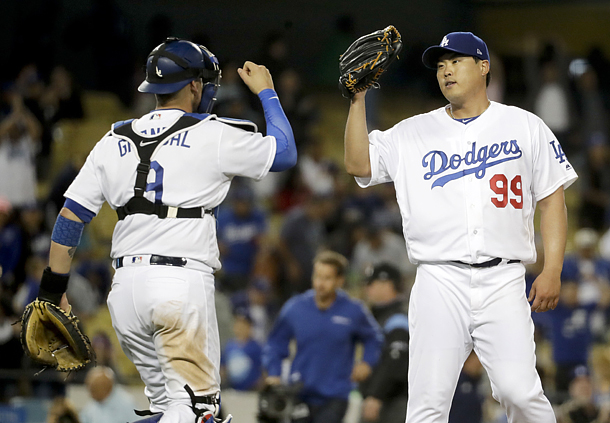 Ryu Hyun-jin, pitcher for the Los Angeles Dodgers, right, celebrates with catcher Yasmani Grandal after the team won 7-3 against the St. Louis Cardinals at Dodger Stadium on Thursday. [AP/YONHAP]

Ryu Hyun-jin of the Los Angeles Dodgers has earned his first major league save after throwing four scoreless innings.

The Korean southpaw relieved starter Kenta Maeda at the top of the sixth against the St. Louis Cardinals at Dodger Stadium in Los Angeles on Thursday, with the Dodgers leading 6-3. It was his first relief appearance in his major league career and also his first outing since his most recent start on May 18.

Ryu worked around a two-out single by Kolten Wong at the top of the sixth and got all his three outs on grounders.

Ryu came back out for the top of the seventh after the Dodgers added a run in the bottom sixth. He allowed a one-out single to Tommy Pham, struck out Matt Carpenter and got Jedd Gyorko to ground out to shortstop.

The left-hander started the eighth by getting a grounder off the bat of Yadier Molina. Stephen Piscotty grounded out to short and Aledmys Diaz went down swinging for Ryu’s first three-up, three-down inning.

Ryu even took his turn at the plate in the bottom eighth but struck out swinging against Jonathan Broxton.

Ryu walked Wong on four pitches to start the ninth but got a lead runner out at second on a fielder’s choice grounder to short. Ryu then induced a game-ending, 6-4-3 double play off Dexter Fowler to secure his first big league save.

Ryu has been a starter his whole career, dating back to 2006 in Korea. Only nine of his 190 career appearances in the Korea Baseball Organization from 2006 to 2012 came in relief. He signed with the Dodgers before the 2013 season and made 64 starts over four seasons - he missed the entire 2015 season with a shoulder injury - before Thursday’s game.

Ryu said afterward he wasn’t happy with his own numbers as a starter but feels he has a shot at returning to the rotation if he pitches well in relief.

“I’m a starter at heart,” he told MLB.com. “I believe I will get another opportunity as a starter, and at one point that was part of the conversation. Today was just a one-time appearance, so I can’t really say I’m good in this role or bad in this role. After today, we’ll have to see.”

In addition to the shoulder operation in 2015, Ryu had an elbow surgery in 2016 after making just one start. This year, he’s not been able to throw his fastballs with authority, and has had to rely on change-ups and curves to get through innings.

The Dodgers have a surplus of starting arms, and seven different pitchers have made a start this season. Even after young gun Julio Urias was demoted to the minors last weekend, manager Dave Roberts had six healthy starters, with Maeda getting activated from the disabled list for his start Thursday.

Ryu got squeezed out as Roberts tried to juggle his rotation. Alex Wood, Brandon McCarthy and Clayton Kershaw are scheduled to start against the Chicago Cubs on the weekend.

Discussing Ryu’s status earlier in the week, Roberts said if Ryu were to serve in the bullpen, the move “wouldn’t be permanent.”

“We have an excess of quality starting pitchers,” he said. “So to try to get innings for guys is tough. I think [Ryu] is open to doing whatever he can to help our ball club.”

Roberts had a lengthy conversation with the pitcher before Wednesday’s game, according to local reports.

“There’s a potential routine change, and you’ve got to be sensitive to that,” the manager added. “There’s a lot of variables. So it’s not an easy thing. We really want to talk through it and make the right decision.”