The worst of all possible worlds

The worst of all possible worlds 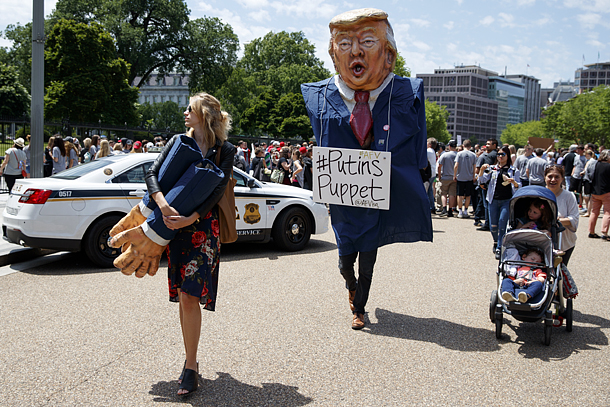 Demonstrators gather outside the White House on May 10, a day after President Donald Trump fired FBI Director James Comey in Washington. [AP/YONHAP]

It is hard to communicate the vertigo many Americans have experienced the last two weeks. With the decision by the Justice Department to appoint a Special Counsel and the president traveling on his first foreign trip, the country has gotten a brief respite from the problems lapping at the White House door.

In fact, we are now in the worst of all possible worlds. The presidency is not yet vulnerable to impeachment, and may never be. Information in the public record about collusion with the Russians remains thin, the Republican base is holding and the party continues to control both houses of Congress.

But the administration is not likely to right itself soon, in part because of the inability of the president to focus on the details of complex legislation and stick to a coherent script. The result will be a continuation of scandals, chaotic management style, outright misrepresentation and lack of accomplishment that has marred the first days.

The current crises began with the firing of FBI Director James Comey. President Trump calculated that the move actually would garner bipartisan support. For Republicans, Comey was identified with the probe into the Russian connection, a major political distraction. But for Democrats, Comey’s public comments about the FBI’s investigation into Hillary Clinton’s emails were seen as sinking her election. There was hardly any love lost on the Democratic side of the aisle.

The decision proved a stunning miscalculation because of the obvious appearance that Trump was protecting himself and might have even obstructed justice. Rather than embracing the investigation as an opportunity to clear the administration and move on, Trump doubled down by calling the probe a “witch hunt.” He even admitted he fired Comey to pour cold water on the investigation, after his surrogates had denied as much. Moreover, he bragged to the Russian foreign minister and ambassador about the firing in a meeting closed to the American — but not Russian — press.

In office, Comey was in an extremely delicate position. Out of office, he is now free to talk. What he has said about private conversations with the president are among the most damning revelations of the Trump administration so far, including a direct request to drop the investigation of former National Security Adviser Michael Flynn.

What will the special counsel investigation — which could take months or longer — reveal? It is possible that it could turn up smoking-gun evidence: that the president’s team — or perhaps even the president himself — conspired with the Russians to undermine Hillary Clinton. This occurred by breaking into Democratic Party servers and disseminating both embarrassing and altogether fake news. The counsel could conclude that Trump obstructed justice.

But it is more likely that the findings from the special counsel, and the investigations on the Hill, will be more ambiguous, with the blame falling more on the Russians than on Trump and his staff. Trump’s oddly pro-Russian stances during the campaign and since do not prove conspiracy, only poor judgment. Poor judgment falls short of the “high crimes and misdemeanors” required to impeach. And proving obstruction of justice isn’t easy, requiring demonstration that the president acted with corrupt intent.

In the end, the underlying difference between the fall of Park Geun-hye and the current situation in the U.S. lies in politics. While Trump’s approval ratings continue to fall, the Republican base remains surprisingly loyal. There have been no open Republican defections as there were from the Saenuri, which splintered under the weight of the Choi Soon-sil affair.

Yet there still is no evidence that the president is learning from his mistakes; rather, he has tended to compound them through off-the-cuff remarks and lack of discipline. Nor is the Russian probe the only vulnerability the president faces, with ongoing concerns about nepotism, conflicts of interest and ethics bubbling just below the surface.

The worst of all possible worlds is one in which the president continues to fight for his political life by mobilizing resentment, attacking the media, undermining the rule of law and further polarizing the country. On the legislative front, he has also doubled down. Rather than focusing on legislation that might garner support, he has stuck to the outsized promises of his campaign: building a wall on the Mexican border, scuttling Obamacare without anything meaningful to replace it, rewriting the tax code in ways that promise ballooning fiscal deficits. It may take the ultimate check on presidential authority — the midterm of elections of 2018 — for a new political alignment to force Trump’s hand. For those living through the challenges now being thrown at American political institutions, that seems like an interminable amount of time.