An instructor at UrbanSlope in Gangnam District, southern Seoul, demonstrates one of the facility’s virtual reality ski slopes. [PARK SANG-MOON]

Seoul has long had a love affair with “screen golf,” a virtual and indoor alternative to 18 rounds of tee time outdoors.

In this densely populated metropolis with too many golfers and too few courses, screen fairways that are open past midnight are a blessing as playing on actual courses is difficult to come by and prohibitively expensive.

Simulated golf has skyrocketed to more than 7,500 locations since the sport was introduced, and as virtual reality picks up steam, facilities that incorporate the technology with other sports are getting in on the game. Golfzon’s year-old sister franchise StrikeZon has blossomed to 112 VR baseball facilities as of last week.

There are now venues where people can virtually ski, bowl, play tennis and even go horseback riding, and they’re opening in all manner of places. In November, Eyeglider, touted as “the world’s first 4D VR zipline,” debuted inside the Gyeongbokgung subway station with financial support from the government, and now it replicates actual courses nationwide in other stations. These VR sports facilities are offering pro and novice athletes a way to shape up without concerns about weather or space. 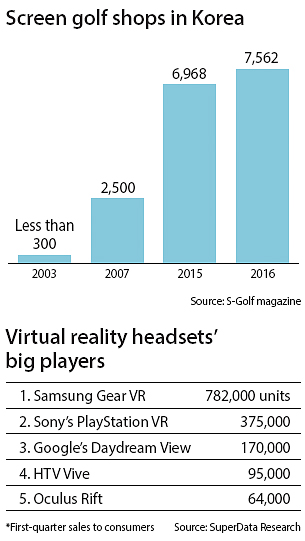 Snowed in but not wiped out

A snowboarding injury a few years ago left this reporter reticent to return to the slopes, so I jumped at the chance to try skiing and snowboarding at UrbanSlope, a virtual reality facility that opened late last year in Gangnam.

The virtual version of downhill skiing is lifelike but less risky, thanks the same simulator the U.S. Ski Team uses to train. At UrbanSlope, customers are fitted with ski boots before tackling one of five simulators for snow sports. The machines recreate realistic slope conditions with nearly every aspect of the slope available for customization. With the press of a button, users can choose settings such as the slope’s length and the softness or iciness of the snow. Once skiers get acclimated, they can increase the difficulty of the run and even try weaving around slalom gates. Intense vibrations enhance the lifelike experience.

I start out slowly, exerting the muscles in my legs to operate the machine and change my speed to navigate a course that appears on a huge, high-definition panoramic screen. “You can be more aggressive,” owner Tom Shin says repeatedly, as I’m reticent to weave too quickly.

In Korea, some amateur athletes use ski simulators at UrbanSlope to perfect their form. One could pull up a course, for example, from the 2014 Winter Olympics in Sochi, Russia. I ask if it’s possible to replicate the course for the PyeongChang 2018 Games. Yes, Shin responds, but “I’m not supposed to play that one.”

While the U.S. Ski Team has long embraced the technology to improve its performance, VR practice hasn’t quite caught on with Korean Olympic athletes. “They seemed to have concluded that it won’t help despite the fact that the Korea Ski Association and the like made numerous inquiries directly to the manufacturer,” Shin says. “It could be due to the high cost of the machines.”

An avid skier, Shin invested $500,000 to start UrbanSlope in a storefront near Hakdong Station in southern Seoul last winter. Simulators start at approximately $40,000, and the largest with full options goes for $120,000.

Shin spent two decades in sales and marketing at Asia Brown Boveri and Samsung Electronics before becoming CEO of Korea Maritime Consultants, the owner of UrbanSlope.

“This is not something I started to make big bucks, but more to create a cultural boom,” he said. “I wanted to introduce this new culture to Korea. I enjoy watching people’s faces when they are on the machine — expressions of pure joy.”

Johannes Scholl, CEO and co-founder of Icaros, a German start-up, is also betting that a combination of virtual fun and competition will encourage more people to work out. Last year, he and his partner, Michael Schmidt, introduced Icaros, an immersive exercise machine that uses virtual reality headsets.

But the virtual reality headsets introduced in 2015 turned out to be a game changer. Icaros machines can operate with the Oculus Rift or HTC Vive headsets but typically ship with Samsung Electronics’ Gear VR, by far the best-selling device in the first quarter of 2017, shipping more units than its main rivals combined.

About 200 gyms and entertainment centers worldwide have purchased the Icaros machines for about 7,900 euros ($8,850) each. Scholl said the company sold several at the Seoul International Sports & Leisure Industry Show in late February. Korea was a prime market because of the company’s relationship with Samsung.

“People all over the world are trying to get healthy without a huge hassle,” Scholl said. “We are not trying to simulate stuff you can already experience. It’s crazy stuff like flying and diving with animals — spectacular things.”

A companion and I found three Icaros machines at Sports Monster, a facility that opened on the top floor of the Starfield Hanam mall in Gyeonggi in September. We placed our elbows, knees and forearms into padded cups, strapped on a VR headset and used our abdomen, back and leg muscles to rotate into a plank position. Our machine took us on a wild, roller-coaster ride as bats swarmed overhead.

Scholl said the virtual reality element is designed to take the exerciser’s mind off the physical exertion, but after a few seconds of swarming bats and plunging downward, my companion asked to stop and disembark, forgetting the experience was virtual and not actual.

Although Icaros wouldn’t release sales figures, Scholl said the company of two in April 2016 now has 15 employees and is still hiring. Designed for gyms, the machine will be ready for individual sales early next year, Scholl said.

At Sports Monster, 23,000 won is the cost of admission for two hours of virtual reality engagement. There are rooms with high-definition screens for soccer, taekwondo, baseball, handball, bike racing and track and field, all operable without headsets.

Until recently, virtual reality was a concept for future design, but it is quickly shifting to the mainstream.

“The virtual reality hardware market enjoyed a watershed moment in 2016 as major products from companies such as Samsung, HTC, Oculus, and Sony shipped into the market, driving substantial unit growth and beginning the technology’s shift from a focus on early adopters to more mainstream users,” Tom Mainelli, vice president for devices and AR/VR at the International Data Corporation, said in a recent report. “In 2017, we’ll see significant product launches in [standalone head-mounted displays], and competition will increase as existing players and newcomers jockey for position in this important new market.”

In February, Korea’s Ministry of Science, ICT and Future Planning opened a center for virtual and augmented reality at Sangam Digital Media City in western Seoul, with the goal of nurturing start-ups and talent as the country aims to become a global powerhouse in the burgeoning VR market. The technology has long been heralded as the future of how people will engage with content, but in Korean sports entertainment, the VR future is now.