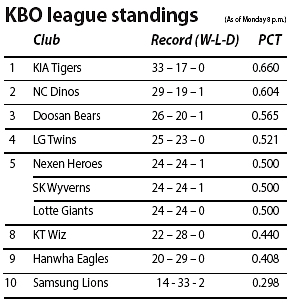 The Doosan Bears are back on track to defend their title.

During their game against the KT Wiz on Sunday, the Bears had a dramatic win. With Oh Jae-il’s solo home run in the second, the Bears had a 4-0 lead until the end of the fourth. However, in the fifth inning, the Bears allowed five runs and were down by one. But the Bears managed to score five runs in the remaining innings to win the game 9-5. Up until April, the Bears stayed in the bottom of the KBO standings, recording 12 wins, one tie and 13 losses.

Starting in May, the Bears returned as a new team. In its ten games, the Bears won eight and only lost two to bring down the LG Twins to fourth. Now, the Bears are ranked third and are pressuring the top two teams as they are only two games behind the NC Dinos, the second-ranked team, and five games behind the Kia Tigers.

Meanwhile in Incheon, the SK Wyverns defeated the Twins 5-2 to sweep their three-game series over the weekend. The Wyverns hit a total of four home runs against Cha Woo-chan, the Twins’ starting pitcher. The Twins managed to produce 13 hits, but were only able to convert two into a run. From their three consecutive losses, the Twins dropped to tie for fifth and are now only one game apart from the Wyverns, ranked seventh.

In Changwon, the Hanwha Eagles defeated the NC Dinos 8-1 on Sunday. Bae Young-soo, the Eagles’ starting pitcher, earned his fifth win. In Gwangju, the Kia Tigers defeated the Lotte Giants 8-4 in the 11th inning with Choi Won-joon’s finishing three-run homer. 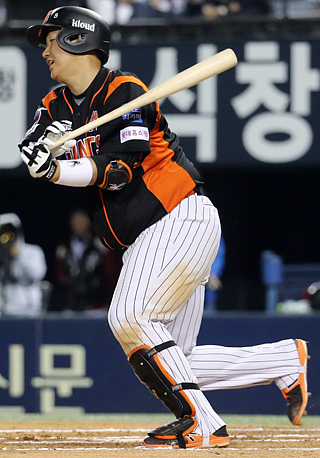 During the Giants’ game against the Kia Tigers on Sunday in Gwangju, Lee hit a home run over the left fence against Patt Dean’s cut fastball at a speed of 136 kilometers (85 miles) per hour, while the Giants were leading 2-1. Lee Dae-ho achieved two-digit home runs for his ninth consecutive KBO season. And his tenth home run also meant the return of the Giants’ fourth batter.

Prior to the start of the season, Lee raised fans’ expectations to lead the Giants to the postseason, but once the Giants’ started to struggle as a team, Lee struggled along with them, failing to hit a home run since their game against the Tigers at home on May 7. The Giants’ batters kept quiet, unable to score.

After a successful career at the KBO, Lee left to play in Nippon Professional Baseball (NPB) for five seasons and played one season for the Seattle Mariners of the Major League Baseball (MLB). Even in the major league, he managed to hit 14 home runs.

The 2017 is Lee’s first season back in the KBO in six years and he continues to prove his value as the highest paid free agent, ranking first in the KBO’s batting average at 0.389 as of Monday.

Starting tomorrow, the Giants will be playing a three-game series against the Samsung Lions in Daegu.