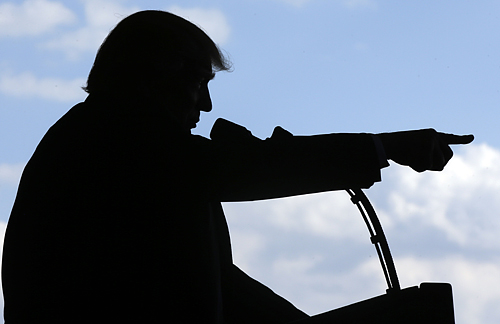 The dignity of a leader indicates the class of the nation. The words and actions of a leader have tremendous impact on his or her people. Chonnam National University’s history professor Kim Bong-jung made an interesting analysis in his book, “The President We Want to Have.”

He analyzed 11 of the most respected U.S. presidents for four qualities: pride, rumination, tolerance and future planning. First President George Washington took pride in establishing the world’s first presidency. The 28th president, Woodrow Wilson, is considered a symbol of rumination for reviving neutrality as a universal principle. The 16th president, Abraham Lincoln, was a champion of tolerance, ending the Civil War and leading America’s integration. The third president, Thomas Jefferson, was an architect of the future for establishing the foundation for the western frontier.

Incumbent President Donald Trump has yet to be evaluated. He has created much controversy so far. During the election campaign, an audio tape containing his vulgar language was exposed. The recording was made during his conversation with NBC host Billy Bush in 2005. He said, “When you’re a star, they let you do it, you can do anything… grab them by the pussy.”

Many people were astonished. But has Trump continued to use unrefined language, even after his inauguration. Someday, he may be the main subject of a book titled “The President We Don’t Want to Have.”

Compared to the Philippines President Rodrigo Duterte, Trump’s language is not as sinister. He recently visited the troops assigned to crack down on the IS-sympathizing rebels in the area under martial law. “Just do your job,” he said. “I will take care of the rest. I will go to jail for you. If you rape three, I will admit it.”

While he said he was joking, the remark was shocking. Human rights and women’s rights groups around the world condemned the pro-rape comment. But he claimed that he was using “heightened bravado” to boost morale. The excuse is simply unacceptable.

It is not the first time that Duterte made sexually inappropriate comments. When he was running for president in April 2016, he mentioned a prison riot case from 1989 and made a joke about an Australian missionary who was killed after being raped by a group of inmates. He said she was beautiful and that he should have been the first.

After the Australian government protested, it became an international issue. Yet, he became president of the Philippines. Was it a slip of the tongue? Or did he really think that? Only Duterte knows. How did the people of the Philippines feel when they voted for him? A well-chosen leader can elevate the dignity of a nation.