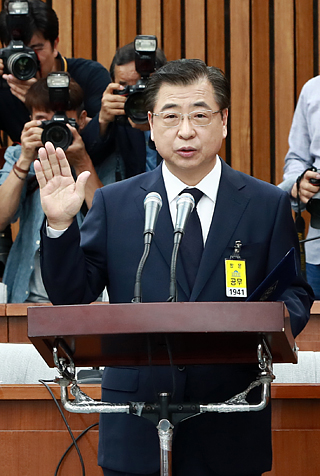 Suh Hoon, NIS director-nominee, testifies at a confirmation hearing at the National Assembly on Monday. [YONHAP]

National Intelligence Service (NIS) director-nominee Suh Hoon said Monday that, if appointed, he will try to completely insulate the spy agency from domestic politics, as pledged by President Moon Jae-in.

“The NIS is not an organization designed to protect any political power,” Suh told a confirmation hearing held at the National Assembly.

The spy agency has long been suspected of using its intelligence capabilities to meddle in politics and even sway elections in favor of the ruling bloc. During the election campaign, Moon has vowed to reform the NIS to get its hands off domestic politics and focus on its overseas operations.

“Due to the controversy over its political involvement, public trust and support for the agency has been threatened,” he said.

“I have this firm conviction that if the state intelligence agency is disregarded by the public, national security could be jeopardized,” he added.

Suh also pledged to brief the political leaders on a regular basis on the security situation to seek “bipartisan cooperation.”

“The security reality of the Republic of Korea is indeed a crisis,” he said, pointing to the North’s nuclear threats as well as the complexity of geopolitics in Northeast Asia.

“It is the nation’s basic responsibility to protect the nation and citizens’ lives and safety in the face of these threats,” he said.

During the hearing, opposition parties were expected to focus on his stance on North Korea and NIS reform, and ethical qualifications.

Suh’s appointment does not require parliamentary consent, but any intense parliamentary opposition could pose a political hurdle to the new spy chief in charge of the country’s key intelligence affairs.

The parliament’s intelligence committee is expected to adopt the report on the results of the hearing on Tuesday.

Suh has been dogged by a set of allegations, including suspiciously high payments for his advisory role from a satellite TV company and a private institute.

The nominee received a monthly payment of 10 million won ($8,930) from KT Skylife for nine months from April 2012. He also obtained 120 million won while working as a non-standing advisor for Samsung Economic Research Institute for two years from July 2008.

Suh claimed that the payments were given in due consideration of his experience and the advice he provided to them.

Suh, 63, played a key role in preparing for the landmark inter-Korean summits held in June 2000 and October 2007. Moon’s nomination of him was thus seen as his resolve to improve cross-border ties.