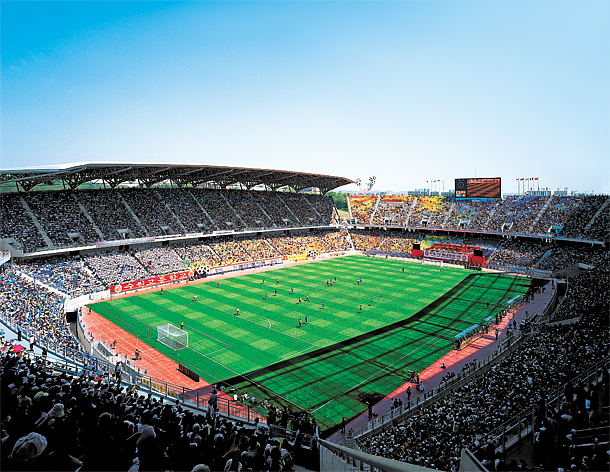 The 2017 FIFA U-20 World Cup is underway, with 24 participating countries. The final match will be held at Suwon World Cup Stadium on June 11. [SUWON CITY GOVERNMENT]

The 2017 FIFA U-20 World Cup has been underway since May 20 and will continue until June 11. The games are held in six cities across Korea, including Suwon, Incheon, Daejeon, Cheonan, Jeju and Jeonju. The first match took place in Jeonju, and the closing match will take place in Suwon.

Twenty-three nations have joined Korea for the big event, including 4 countries from Asia, 5 from Europe, 4 from Africa, 4 from North and South America, and 2 from Oceania.

On May 20, the Korean national team beat Guinea 2-0 during the tournament’s opening game. They went on to beat Argentina on May 24, securing a spot in the round of 16. While it lost to England on May 26, the team finished second in its group.

Korea’s best performance as of late was at the 2013 U-20 World Cup in Turkey, where it reached the quarterfinals. The team was eliminated from the group qualification match during the New Zealand game.

This year, Suwon city co-hosts the U-20 World Cup with Incheon, Cheonan, Daejeon, Jeonju, and Jeju. This is the fourth major soccer game the city has hosted, after the FIFA Confederations Cup in 2001, the World Cup Japan/Korea in 2002, and the U-17 World Cup in 2007. Suwon is the second city to host all major FIFA games after Mexico City. Before, no other cities in Asia have ever hosted all four.

Suwon began its endeavor to host the game in March 2013. It organized a commission to bring the FIFA U-20 World Cup to Korea and submitted its application in December 2013. Its biggest strength was that it had hosted three major tournaments and that the Seoul metro extends to Suwon, making the city approachable for visitors.

Home to two professional football teams, the city has a stadium that can seat 44,000 spectators, accommodations for executives of FIFA and football teams, and a solid infrastructure including convenient transportation and medical system. Moreover, it has hosted 40 large-scale football events over the last 10 years. Its annual investment in football facilities and competitions totals 8 billion won ($7.1 million) — the largest amount spent by a local government in Korea.

Its efforts have proved to be fruitful. In September 2015, FIFA voted Korea as the host of the 2017 U-20 World Cup. In November of the same year, Suwon became one the host cities of the event.

“Through this event, Suwon has leapt forward to become on of the world’s best cities for football players,” said an official from Suwon city, “We will do our best to make this tournament a successful one.”