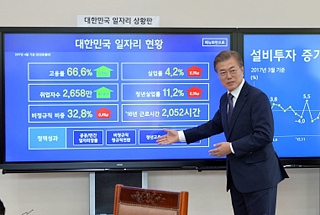 “Lately, government jobs are not popular among young Japanese people. Private companies are competing to hire them,” a Japanese embassy official told me about the labor shortage in Japan. Ninety-seven percent of college graduates find a job upon graduation. It is completely different from Korea, where adding 810,000 public jobs was a major campaign promise that is about to be implemented.

But scars still remain in the spring of Japan’s labor market. The young people who were looking for jobs after the bursts of economic bubbles since the 1990s are the “lost generations.” Youth unemployment surged as a result of restructuring and low growth and increased to double digits in 2003. It was the time when new terms like “NEET,” not in education, employment or training, and “freeter” to described the underemployed, were coined. Twenty years have passed, and youth unemployment has fallen to 4 percent now. However, many of the “lost generations,” now in their mid- to late-40s still are unstable. They have been alienated from the regular labor market.

Perhaps, Korea’s unemployment problem will gradually be resolved, as the youth population of Korea is decreasing faster than that of Japan. But the Korean version of lost generations will remain a burden to the society. So President Moon Jae-in’s drastic policy promises are convincing and meaningful. On the argument that all problems can be solved in the market, John Maynard Keynes said, “In the long run, we are all dead.”

In order to accomplish the good intention of Moon’s promise, it is necessary to implement detailed policies. But as the new administration is established without a transition team, we have yet to see the process. Fortunately, the Blue House secretary of jobs is working with competent officials from each ministry.

What needs to be refined urgently is the number, 810,000. Numbers are magical and stick in the memories of voters. But when a number becomes a policy, it can turn into a dogma. Moreover, the original writer of the policy explained the number is not precise. The average public employment of OECD countries is 21 percent, and Korea’s public sector employs only 7 percent. To increase to half of the OECD average, we need to increase public employment 3 percent, which translates into 810,000 jobs. While “half of the average” is a desperate goal, it is not a precise or detailed number for a policy that requires taxpayers’ money.

Also, the gaps in the promise need to be filled, most notably the public sector reform. While the public sector employs 7 percent of jobs in Korea, it takes 18 percent of the total wages of workers. As a priming water in the public employment, the holes in the leaking jar need to be closed. Only then, we won’t be left with people studying for public service examinations in Noryangjin five years later.

*The author is a deputy business and industry news editor of JTBC.