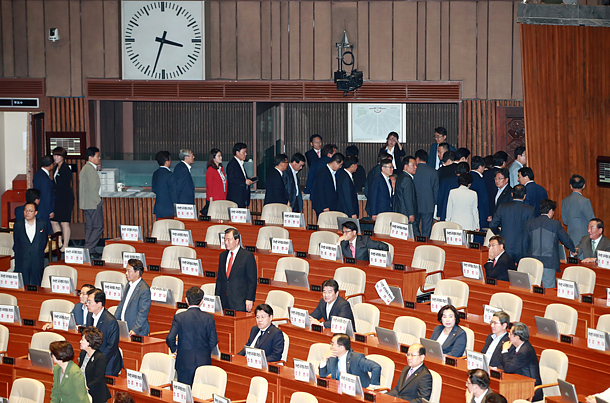 Lawmakers of the opposition Liberty Korea Party walk out of the main conference hall of the National Assembly on Wednesday in protest, shortly after National Assembly Speaker Chung Sye-kyun introduced the motion to confirm Lee as prime minister. [YONHAP]

The voting took place in the afternoon and 188 lawmakers attended the session. Shortly after National Assembly Speaker Chung Sye-kyun introduced the motion to confirm Lee as prime minister, the main opposition Liberty Korea Party walked out to express their rejection.

Of the 188 lawmakers who participated in the secret vote, 164 voted for the nomination, 20 opposed, two abstained and two votes were invalid.

Moon nominated Lee, a veteran politician who was governor of South Jeolla at the time, on May 10, the first day of his presidency. Lawmakers scrutinized him during a two-day confirmation hearing, as it was revealed his wife had used a fake address in 1989 to get a better posting as a teacher.

Earlier in the morning, the special committee on the confirmation hearing held a meeting and approved the hearing report. The Liberty Korea Party lawmakers on the committee left the room in protest, but lawmakers from the ruling Democratic Party and other opposition parties approved the report and sent the confirmation motion to the voting session.

The report contained both negative and positive evaluations. While the committee concluded that Lee is “fit to serve as the first prime minister of the new administration,” the report also stated flaws, including his wife’s fake address usage.

Although Moon managed to secure the prime minister appointment, other nominees to top government posts are facing strong opposition. Kang Kyung-wha, the nominee for foreign minister, and Kim Sang-jo, the nominee for head of the Fair Trade Commission, are being criticized for ethics breaches.

Moon pledged during his campaign that he would not appoint senior officials with a history of five particular forms of ethical breaches: draft-dodging, tax evasion, fake address registration, plagiarism or real estate speculation. As his nominees, one after another, were found to have committed them, Moon sought understanding from opposition lawmakers to support his early nominations, as they were made in a hurry. He took office the next day of the election without a transition period, as his predecessor, Park Geun-hye, was impeached and removed in March.

Kang admitted she had used a fake address to send her daughter to the school that she graduated. After the JoongAng Ilbo reported that it was actually the address of the school principal and not her relative, as explained by the Blue House, Kang issued an apology.

Kim has so far been accused of having used fake addresses, signing two apartment contracts with lowered prices for the purpose of tax evasion, failing to obtain the permission of Hansung University, where he works as an economics professor, to work for a civic group and plagiarism. His son was also accused of having received special treatment while serving in the military.

The JoongAng Ilbo reported exclusively on Wednesday that Kim’s wife was suspected of having evaded income taxes.

She was the head of an English academy in Daechi-dong, Gangnam District, Seoul, from May 2005 to September 2007, according to a report Kim submitted to the National Assembly. Another record from the National Health Insurance Corporation, however, showed that she was registered as a dependent of Kim, a status only allowed for someone with no income.

The People’s Party, the third largest power in the National Assembly, said Kang and Kim’s confirmations are separate matters from approving the prime minister. Most of the party’s 40 lawmakers represent Jeolla regions, and it supported Lee as the prime minister for his strong political ties to the region.

“We cannot cooperate with the appointments of Kang and Kim,” said Rep. Lee Yong-ho, chief policymaker of the People’s Party. “How dare the Moon administration claim it is different from its predecessors after making these kinds of nominations?”

Although the nominees are required to undergo confirmation hearings, National Assembly approvals are not required and Moon can still appoint them despite lawmakers’ oppositions. Such an action, however, is a political liability for the new president, as he will have to work with the legislature, where his party does not have the majority.

As his attempt to create a cabinet is progressing slowly, Moon named Wednesday vice ministers for six key ministries.

“Ministers are appointed after confirmation hearings and the process takes time,” said Yoon Young-chan, senior secretary for public relations. “We thought it is more effective to appoint the vice ministers and let them grasp the situations first.”

He said more vice minister appointments will be announced as soon as their vetting processes are complete.

Ko Hyoung-kwon, director of the Asian Development Bank and a former senior official of the Finance Ministry, was named the first vice minister of the Ministry of Strategy and Finance.

While no appointment was made for first vice minister of foreign affairs, Cho Hyun, a career diplomat, was named the second vice minister. The Blue House said his expertise in multilateral diplomacy was taken into account. Chun Hae-sung, a specialist in inter-Korean negotiation, was named vice minister of unification.