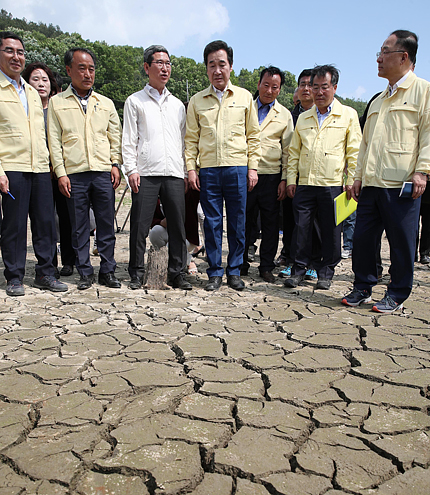 Prime Minister Lee Nak-yon, center, examines mud cracks on Thursday at Madun Reservoir in Anseong, Gyeonggi, to study the damage brought by a protracted drought, one day after he was officially appointed as prime minister. [YONHAP]

Prime Minister Lee Nak-yon said in his inauguration speech on Wednesday he would strive to form a cabinet that will take on unfair and discriminatory practices in the country and solve myriad social problems facing the country.

In his speech before public servants in the inauguration ceremony held at the central government complex in Gwanghwamun in Seoul, the former South Jeolla governor official stressed that the new cabinet should actively communicate with the people, saying it “should be part of the people” instead of “being trapped” in itself, an apparent dig at the former Park Geun-hye administration.

Lee also said the Moon government is the outcome of candlelight protests and that he himself would lead a cabinet that will address myriad social problems, from job creation and housing to peaceful unification with North Korea.

“The cabinet should be competent to solve problems of the past, present and future,” said Lee. “We, the government servants, should be prepared to fix unfair and discriminatory practices and regulations in the country.”

Lee’s inauguration came just hours after his confirmation was passed through the National Assembly with a vote of 164 to 20.

Two abstained and two votes were invalid. In protest, the largest opposition Liberty Korea Party (LKP) walked out of the Assembly chamber before the vote.

On his second day as prime minister, Lee paid a visit to Seoul National Cemetery and visited leadership members of each party. While Lee was greeted by party leaders of four major parties, the LKP refused to meet with Lee, continuing its protest.

The LKP also declared a boycott of the three-way consultative body involving the Moon government, the ruling and opposition parties in protest over Lee’s nomination.

Following confirmation hearings on Lee last week, the conservative party made clear its opposition to Lee’s nomination as No.2 official and demanded the Blue House drop its nomination for prime minister, citing fake residential addresses his wife had registered in 1989 as well as other ethical breaches.

Lee’s nomination was passed largely thanks to the minor centrist opposition People’s Party. Lee is from Jeolla region, an area of crucial support for the party of 40 lawmakers.