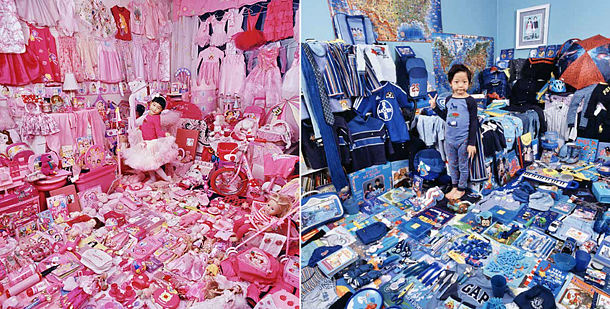 Korean photographer Yoon Jeong-mee’s project “The Pink&Blue Project,” some of which was featured in National Geographic’s January 2017 issue, takes a look at the phenomenon of girls preferring pink and boys preferring blue. [JOONGANG ILBO]

What does it mean to do something “like a girl?” Part of the #LikeAGirl campaign, which launched in 2014 by the female hygiene brand Always, a three-minute video that showed the stereotypical view of girls from the perspectives of men and women of all ages went viral, reaching 60 million views on Youtube. The cast were asked to demonstrate what they think of the phrase “like a girl,” and most of them made feeble and stereotypical actions — giggling, waving their hands and flipping their hair like they were in a cat fight. When young girls were asked “Is ‘like a girl’ a good thing?” they replied that it is usually said to humiliate someone. What made them develop such stereotypes about a certain gender? Children’s media, like cartoons, picture books, and textbooks is filled with stereotypical portrayals of gender. Although some say that these are just a source of entertainment, there is no denial that they are instructional to kids. Especially for younger children, who do not yet have a fully developed understanding of gender roles, innocent cartoons and books can give subtle, yet powerful messages. 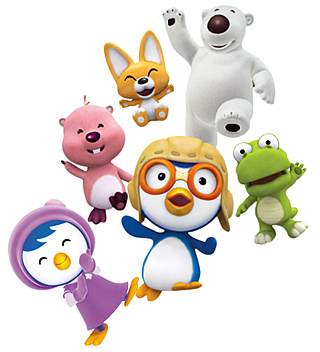 Children start watching TV from a young age, but they tend to have difficulty identifying fantasy from reality. “The Little Penguin Pororo,” the phenomenally successful animated series that tells the tale of a little penguin named Pororo and his adventures with his friends, is one of the most popular characters among Korean kids. However, when analyzed, “Pororo” contains some gender stereotypes. Out of the 11 characters in the show, only two — Loopy, the shy beaver, and Petty, a little penguin — are female.

A study titled “Analysis of Gender Roles in Picture Books on the Korean Activity Textbook of the National Elementary Curriculum Revised in 2009” published by Hyun Eun-ja, Seol Ryu-na and Hong Ji-min from the Department of Child Psychology and Education at Sungkyunkwan University in 2014, analyzed 59 picture books. This analysis showed that the ratio of females and males are similar — male characters show up 123 times, and female characters appear 111 times. However, whereas 61.9 percent of male characters had occupation that was listed on the Statistics Korea’s Korean Standard Classification of Occupations (KSCO) list, only 27 percent of woman had jobs on the list.

When you walk through the toy aisles at department stores, you can easily tell which section is for girls, and which is for boys. One can easily notice that the boys section is filled with blue or black robots or Legos and the girls’ section is usually filled with pink princesses or make-up items.

This tendency caught the attention of Korean photographer Yoon Jeong-mee’s eyes. She began “The Pink & Blue Project,” and began taking pictures of young girls and boys, like her five-year-old daughter who is a fan of the color pink. Her project was featured in the January 2017 issue of National Geographic magazine, and she told the magazine that, “Blue has become a symbol of strength and masculinity, while pink symbolizes sweetness and femininity.” She wondered if this phenomenon is merely just a matter of the child’s taste, or a coerced thought. The article also quoted professor of American Studies Jo Paoletti from University of Maryland. “It’s been fueled by the pervasive color palettes of Barbie, superhero movies, and other staples of American childhood,” Paoletti said.

A housewife and a mother of two daughters in kindergarten surnamed Oh, who lives in Incheon, said that she did not really take into account buying certain colored toys to her daughters. “Maybe because I was raised in a big household with three sisters and two brothers, I did not have much voice in the family. I just played with the toys that my older sisters and brothers used, and wore clothes that they used to wear. So I did not really have a favorite color when I was a kid.”

However, she mentioned that she cares about what kind of environment her daughters grow up in. “Personally, when I buy toys and other products that my child will look at closely, I gravitate towards to objects that are less gender-defining. But when I take my kids out to shopping malls, they always buy pink-colored things.” For their Children’s Day gift, she bought her two daughters a stuffed toy of Elsa from the Disney animation “Frozen.”

“Before I was due to give birth, I read books with titles like ‘Guidelines for Child Rearing,’ and those books advised me to refrain from linking certain colors to kids. So, when I decorated the kids’ bedrooms, I try to use more neutral colors, especially using white the most.” She added that she was curious as to if this phenomenon is their natural instinct or resulted from forced thinking.

“I like pink things. I just do,” said her younger daughter, who is currently in kindergarten.

When looking at picture books or watching cartoons, most of the female characters wear pink or purple items, and viewers can easily distinguish the gender of characters based on which color the characters have on. Male characters usually wear helmets, gloves or glasses, and female characters tend to wear things that are more decorative, like hair pins, scarves or skirts.

The effects on children

Professor Jun Mi-kyung from the Department of Home Economics Education at Dongguk University, told the Korea JoongAng Daily that, “One of the biggest characteristics of culture is how the people in that culture interpret a certain image. If people live in a culture surrounded by stereotypes, they will not be able to raise questions or pose problems, which I think is the biggest problem.”

She continued that as we live in an era where we easily face new cultures and people, having a fixed set of paradigms comes as an obstacle when adapting to a new environments or meeting new people.

“Kids are more vulnerable to stereotypes, because once it is formed, it is not easy to reverse that in the future,” said Jun.

She continued that “Not only are the gender stereotypes problematic, but some textbooks do not seem to reflect the reality of current society. For instance, when I was looking at the textbooks that my kids were using, I was surprised that the elderly were portrayed as overly weak. They are still depicted as a person who is asking for directions with a heavy parcel in their hands, which I thought was quite odd.”

Left: Anthony Browne’s “Piggybook” is ranked 10th on the best-selling picture book list on Kyobo Book’s website. Right: A book titled “Mom, Do You Think About Me at Work?” [JOONGANG ILBO]

On Pororo, which just released a new season, some few adjustments were made to keep up with social trends. Out of 11 characters, Loopy was the only character that cooks. Choi Jong-il, the CEO of Iconix, who created the character Pororo, said that that’s why the character Petty was invented. She is “an outgoing penguin who is bright and athletic,” according to the character description.

Another popular animation from EBS Robocar Poli, which is about cars that transform and help to rescue those in trouble, features a female engineer named Jin. She is in charge of repairing and maintenance work. 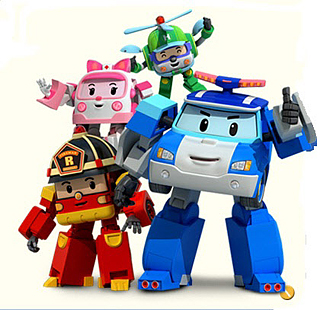 Popular cartoon “Robocar Poli” is about cars that can transform to help those in trouble. It features a female engineer named Jin, who is in charge of maintenance. [JOONGANG ILBO]

On the website for Kyobo Book, the nation’s largest bookseller, a picture book by Anthony Browne called “Piggy Book” was ranked 10th on the best selling picture book rankings. This book is about Mr. Piggott and his two sons who just won’t help their mom with housework, like washing the dishes, making beds and vacuuming the house, before she goes to work. Even after work, when she is fed up with the housework, Mr. Piggott and the boys just sit in the couch and lounge around.

One day, a note saying “You are Pigs” is left on the table and Mrs. Piggott disappears, and the house becomes a big giant mess. When she comes back, the boys and Mr. Piggott beg her to stay and offer to start helping out around the house. When she is finally liberated from all of the chores, she works on repairing a car, which was her hobby.

“Compared to the past, there is some definite change to how genders are portrayed, but I think it is still not enough,” said Oh.