The policies that will move Korea forward

The policies that will move Korea forward 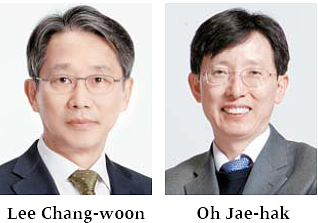 LEIPZIG, Germany - Starting July 2018, Korea will be co-hosting the International Transport Forum here, and the new secretary general of the ITF will also hail from Korea, a high calling for the country to meet heavy expectations from the world’s transport policy makers.

While Korea excels in some aspects of transportation, tight regulations and reluctance to move beyond the status quo still remain obstacles. The Korea JoongAng Daily spoke with Lee Chang-woon, president of the government-run Korea Transport Institute, and Oh Jae-hak, the institute’s vice president, while they were attending this year’s ITF on Thursday to discuss Korea’s transportation development.

“Korea is actually very developed in terms of basic public transportation infrastructure,” Lee said, “for instance, the popular transit card system where passengers can move around all parts of Korea with a single integrated card. However, it is relatively slow in adapting to the latest trends in transport such as autonomous driving and the sharing economy,” referring to a market model based on peer-to-peer exchange as opposed to business-to-consumer.

One glaring example of Korea’s reluctance to fully embrace new economic models is the shaky entry of ride-hailing service Uber in the local market. As it has with many countries, Uber launched in Korea in 2013 to heavy opposition from local cab drivers, and by the next year, Korea became the first country to indict the company’s CEO.

“One of the major reasons why we are not moving ahead as quickly is in part because none of the stakeholders want to give up their vested interests,” Lee said. In the case of Uber, cab drivers were not convinced that the ride-hailing app might help them, he said.

“It is the government’s role as a policy maker to come up with an agreeable plan for taxi drivers if the disadvantaged group is clear,” Oh said. “Say it takes 10 years to fully transition to a sharing economy. Then on the way, the government needs to use its budget to retrain them for other jobs or give subsidies to find other opportunities, but that process is not being readily pursued at the moment.”

The reluctance to solve the issue comes from the different priorities that the Korean government has compared to other countries, Oh said. China, for example, has its own local ride-hailing service called Didi Chuxing and bike sharing services Mobike and Ofo, while Korea has only one cab-hailing service, Kakao Taxi.

“Part of my idea to relieve ongoing debate in Korea about allowing ride-hailing services is to give taxi drivers the share of the ride-hailing business so they can partake in the profit structure of Uber-like services,” Oh said. “But frankly speaking, not many people in Korea even realize the benefits or at least the change that the sharing economy will bring, so we are really at an early stage in that aspect.”

Transitioning to shared mobility, in which individual vehicles are shared by different people, would lower traffic volume and emissions, according to research released Thursday by the ITF. Emissions could be reduced by 62 percent in metropolitan areas worldwide and by 53 percent in cities alone, the study said.

“As for driverless cars, people fear machines won’t be reliable,” Lee said. “However, there are multiple studies that say traffic accidents will be reduced by 90 percent.”

While Korea, known for its high internet penetration rate and IT infrastructure, might seem like an obvious candidate for autonomous driving research, Lee said the country has been a late mover.

“The Ministry of Land, Infrastructure and Transport is actually putting in effort to foster autonomous driving development,” Lee said, “and so we hope Korea can catch up and become a leader in the business.”