Korea prepares for World Cup qualifier in UAE against Iraq

Korea prepares for World Cup qualifier in UAE against Iraq 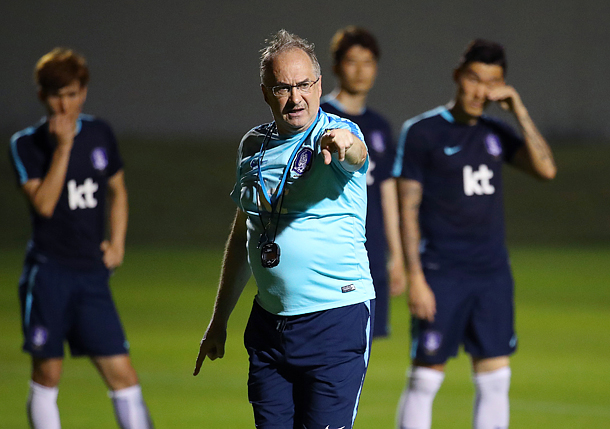 Uli Stielike, head coach of the Korean national football team, gives direction to players during their training at a football field in Ras Khaimah, the United Arab Emirates, on Monday. The team will be playing in a tune-up match today against Iraq, which is 120th in the FIFA rankings. [YONHAP]

Korea will fine-tune their preparation for a crucial FIFA World Cup qualifier when they face Iraq in a friendly this week.

This match is a tune-up for Korea’s upcoming World Cup qualifier against Qatar in Doha on June 13. With three matches remaining in the final Asian qualifying round for the 2018 FIFA World Cup, Korea is currently in second place, the last automatic qualification spot, in Group A with four wins, one draw and two losses.

With 13 points, the Taeguk Warriors are four points behind leaders Iran and just one point above Uzbekistan.

In Asia, only the top two from each of the two groups advance straight to the World Cup in Russia, while the two third-place teams have to go through a playoff for the right to join the other four.

Stielike called up 24 players for their two matches in the Middle East, but they only trained with the full squad on Monday because some joined late due to their club duties.

Korea, ranked No. 43 in the latest FIFA rankings, will try to improve the players’ fitness and boost confidence against Iraq before flying to Doha on Saturday. Adjusting to the region’s hot weather is also the reason why they will face Iraq away from home.

Since the final Asian qualifying round started in September 2016, Korea has yet to collect a win on the road.

Iraq, No. 120 in the June FIFA rankings, is in fifth place in Group B with one win, one draw and five losses. They can’t finish inside the top two in their group but still have a slim chance of taking the No. 3 spot.

Korea boasts a superior head-to-head record against Iraq with seven wins, 10 draws and two losses. The last time they lost to Iraq was in 1984. In their latest meeting in the 2015 Asian Cup semifinal, Korea blanked Iraq 2-0.

Stielike will likely check his key players, including in-form Tottenham Hotspur attacker Son Heung-min - who notched 21 goals in all competitions for the London club this past season - and Swansea City anchorman Ki Sung-yueng, also captain of the national team.

Those who were selected for the first time or made a long-awaited national team return can also go through a test in an Iraq friendly to see how they mingle with the regular members of the team.

Crystal Palace winger Lee Chung-yong and Borussia Dortmund left back Park Joo-ho will have to prove they are worthy of a spot on the squad despite their little playing time with their respective European clubs.

Iraq is coming off a meaningful 1-0 win over Jordan in a friendly at home Thursday. For the first time since 2013, they hosted a football match on their soil after a FIFA ban was partially lifted last month.

The Iraqis will also try to shape up their football in the Korea friendly as they are scheduled to face Japan in their own World Cup qualifying match June 13.