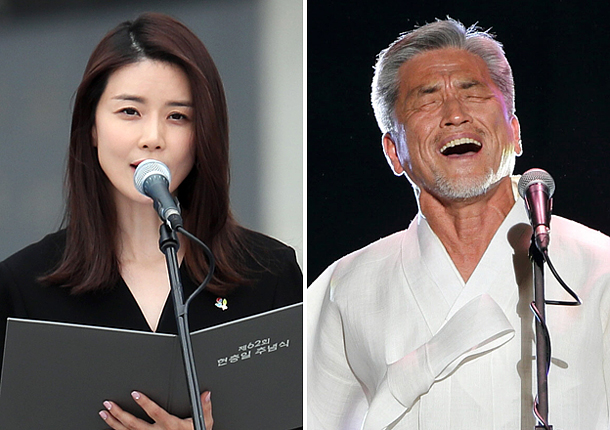 Stars came out to honor soldiers who lost their lives during the Korean War yesterday to mark the country’s Memorial Day holiday, known as Hyeonchungil.

Lee read out a poem written by Yu Yeon-suk roughly translated to “Spirits Become Stars,” which brought tears to the eyes of the audience.

The final performance was given by musical actors Kai and Jeong. The two sang a song roughly translated to “For My Country,” which was written using words from letters written by fallen soldier Kang Tae-jo as well as members of his family.

President Moon Jae-in was also present at the ceremony and read out a heartfelt memorial address.

Celebrities not in attendance also honored those who had lost their lives in battle on social media.

Singer Jun Hyo-seong uploaded a photo of the national flag and added the caption, “Today is Hyeonchungil. We will never forget your honorable sacrifices for our country.”

Ye-sung of boy group Super Junior also paid respects to the fallen, posting, “We will never forget the noble sacrifices you have made.”

Many other celebrities, including singers Ki Hui-hyeon and Shannon, along with comedian Kim Ji-min, urged people to hang the national flag and to show true patriotism.