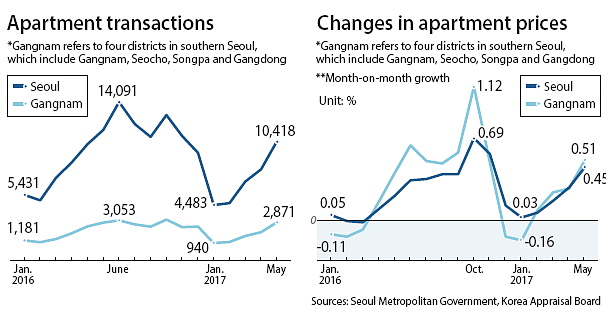 The Moon Jae-in administration’s first task related to household debt and the real estate market will be to decide qualifications on mortgages - particularly loan-to-value (LTV) and debt-to-income (DTV) ratio.

The two ratios are set once a year and current regulations end next month. The LTV ratio stands at 70 percent and the DTV ratio is 60 percent. These figures haven’t changed since 2014, under the Park Geun-hye administration. In the past, the ratios were about 50 percent before regulations were eased in 2014.

The government will decide whether to change the current figures by July. When the government toughens the regulations, the amount of money that can be borrowed for new homes will be reduced.

Many agree with the idea of toughening regulations since housing prices have been rising recently. But some believe that changes in the ratios might have a negative impact on the economy since they can limit the amount borrowed

“We will announce the new policies on household debt in August but we will work on it in July as the new regulations will go into effect on August 1,” said an official at the Financial Services Commission.

The country’s financial regulators have been on the side of not changing the current ratios.

“The president, Moon Jae-in, didn’t make an official promise on reducing the rates and we believe this is a certain type of message from him,” a senior official at the financial watchdog said last month. In fact, Moon’s campaign platform doesn’t mention lowering the current LTV and DTI ratios.

What’s changed the most since then is the nomination of Democratic Party lawmaker Kim Hyun-mee as new Land Minister, which took place at the end of last month. Kim, while serving on the National Assembly’s Strategy and Finance Committee, strongly opposed the Park administration’s decision to ease qualifications for mortgages, particularly LTV and DTI ratios. “Easing the two regulations was the major cause of the increase in household debt,” she told reporters right after being nominated.

Even though she still is a nominee, it is rare for a Land Minister to publicly state the need for changes in LTV and DTI ratios as the Financial Services Commission officially manages this issue. “We are carefully communicating [with the Blue House] at this moment and we think she is getting ahead by too much,” a senior official at the FSC complained.

LTV was introduced in 2002 and DTI was introduced in 2005 to regulate mortgage loans. The two figures were used to measure borrowers’ ability to repay loans but were instead used to lower or increase the prices of household properties. Former President Park increased the LTV ratio from 50 percent to 70 percent and the DTI upper cap from 50 percent to 60 percent in July 2014. The Park administration said it would normalize the real estate market.

The FSC, on the other hand, is skeptical about how useful the LTV and DTI are. The financial regulator believes that the ratios, which are standardized, will only give a green light to financial institutions to disburse loans freely as long as they don’t exceed the upper ceiling of the ratios.

This is why FSC is trying to use the debt service ratio (DSR), which calculates the principal and accrued interest that must be repaid relative to the borrower’s, instead of using DTI. But the FSC is devising a DSR screening model in the fourth quarter, which the watchdog won’t be able to use until next year.

Critics say that the government needs to solve the household debt problem by using current LTV and DTI figures.

“If the household debt continues to rise at a fast rate, the government needs to toughen the LTV and DTI regulations, or at least in regions where the real estate market is heated,” said Im Jin, a senior researcher at Korea Institute of Finance.

Song In-ho, a researcher at the Korea Development Institute, also argued that DTI and LTV rates should return to previous levels.

The new regulations will be announced after the nomination process of government branches is over. Nominees for Finance Minister and Land Minister are waiting for the public hearing process, but there isn’t even a nominee for the chair of the FSC yet.

Many also are curious about what the Bank of Korea will do later this year. The central bank has kept the key interest rate low, which is often blamed for the high household debts.

“The government will come up with plans to solve problems that people with heavy debt face in August, and I think the BOK can seriously discuss on whether to raise the interest rate after that,” said Yoon Suk-heon, a visiting professor of economics at Seoul National University.