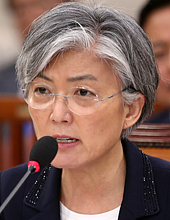 President Moon Jae-in’s plan to name a senior UN diplomat as the country’s first female foreign minister is on the brink of a meltdown as the People’s Party said Thursday it will reject Kang Kyung-wha’s appointment.

The third-largest political group in the legislature held a general assembly of its lawmakers in the morning and decided its stances on top nominees. While the lawmakers agreed to reject Kang’s nomination, they decided to cooperate with Moon and the ruling party to confirm some other nominees.

On May 31, the Democrats managed to pass a confirmation motion to appoint Lee Nak-yon as the new prime minister with the help of the People’s Party, despite the Liberty Korea Party’s boycott of the voting. But at the lawmakers’ meeting, the People’s Party decided that it will support other top nominees, except Kang.

“In addition to the ethics issue,” said Rep. Choi Myung-ghil, spokesman of the party, “we concluded that she does not have enough experience to serve as foreign minister as the country faces urgent diplomatic issues such as the North Korean nuclear crisis, the controversy over the Terminal High Altitude Area Defense antimissile system and the contentious ‘comfort women’ deal with Japan.”

Hearings have taken place for Kang, Kim Sang-jo, tapped to head the Fair Trade Commission, and Kim Yi-su, nominated as the chief justice of the Constitutional Court. Kim Dong-yeon, a nominee for deputy prime minister for the economy doubling as finance minister, also went through the hearing.

While the National Assembly approval is mandatory to name a prime minister, the president has the right to appoint his ministers even if the nominees are not confirmed after hearings. If the National Assembly does not send confirmation reports, Moon can request the legislature to do so within 10 days. After the deadline, the president can formally appoint the ministers, but such an action will likely have political repercussions.

The Blue House made an appeal to the public on Thursday. “The Blue House and the administration are not formed yet,” Yoon Young-chan, senior public relations secretary, said, noting that 30 days are already passed since Moon took office. “The ruling party was outnumbered by the opposition and we had to launch the administration without a transition team, so we expected many challenges and we are now experiencing one.”

A senior presidential aide also said the Blue House will use all its political power to persuade the People’s Party to support Kang. Moon will visit the legislature on Monday to give an address to seek lawmakers’ support for the government’s supplementary budget plan and other pending issues.

Meetings with the heads of standing committees have also been scheduled to seek their cooperation.

In the case of Kim Sang-jo, the party decided to support him by noting both positive and negative evaluations in the confirmation hearing report.

The People’s Party also said Kim’s wife must face an audit and prosecution’s investigation over an allegation that she received special treatment to get a job. The probes were demands of the Liberty Korea Party.

The People’s Party, however, said it will still support Kim even if the Democrats reject the precondition. “We won’t refuse to endorse the confirmation hearing report even if our compromise is rejected,” Choi said.

The People’s Party lawmakers decided they will support Kim Dong-yeon as the new economy deputy prime minister. The Liberty Korea Party also supports him, and his nomination will likely be confirmed.

The fate of Kim Yi-su remains to be seen. The party decided to endorse the confirmation hearing report to arrange a main session voting on the nomination as its lawmakers want to express their opinions on the liberal judge through vote. “The confirmation hearing is still ongoing and we have not reached a final decision,” Choi said.

Kim’s hearing took place Thursday for the second day, while the Liberty Korea Party demanded that Moon withdraw the nomination for his ideological leaning.

Kim was the only judge on a 9-member bench of the Constitutional Court who objected to the forced dissolution of the Unified Progressive Party in 2014. The UPP was dissolved for being pro-North Korea.