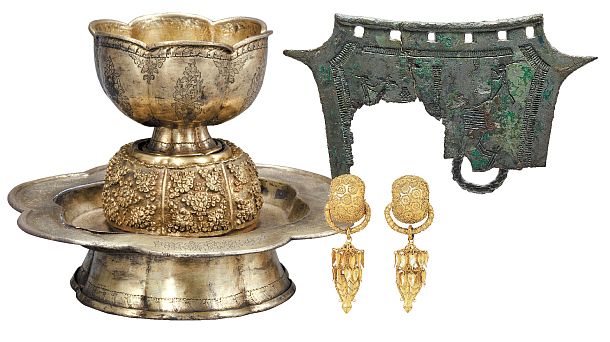 A tiny piece of bronze slate depicts a man farming his land with a tool.

He appears to be naked.

Scholars say the scene portrays a farming ritual where farmers wished for a prosperous year in spring, with men, not wearing clothes, farming the land.

This piece - created from around 300 B.C., the early part of the Iron Age - is Korea’s Treasure No. 1823. It is believed to have been an object used in some sort of a ritual.

Despite its worth, in the 1960s the piece was in the hands of a scrap metal collector and then in an antique market. Today, however, it’s in the collection of the National Museum of Korea, and it was designated a state treasure in 2014.

As with many other treasures, there is a dramatic story behind how a thing of the past became a beloved treasure.

An exhibition at the National Museum of Korea, titled “The New National Treasures 2014~2016” is a place where people can appreciate artifacts that have been designated state treasures between 2014 and 2016.

A total of 50 items are on display. After this exhibition, it’s uncertain when people will be able to see these artifacts again in person.

“Above all, we hope people appreciate the beauty of the items on display,” curator Seo Yu-ri said, adding that they attempted to highlight the artifacts’ artistic as well as historic values.

Beauty is certainly the word that pops in mind when encountering a 12th-century gilt-silver cup from Korea’s Three Kingdoms Period (57 B.C.-A.D. 668), Treasure No. 1899, as well as a pair of earrings from the 5th to 6th century, Treasure No. 1921.

There is also the famous “Water-moon Avalokiteshvara” painting from the Goryeo Dynasty (918-1392). The version, in Horim Museum’s collection, was designated as Treasure No. 1903. Another famous item would be “Donguibogam,” an ancient medical encyclopedia written in 1613 by Heo Jun (1539-1615), a royal doctor of the Joseon Dynasty (1392-1910).

Yi Young-hoon, the museum’s director, said that he personally thought to himself as he was preparing this exhibition about how many of the 21st century’s artworks would become National Treasures and Treasures thousands of years later. “I hope we also continue to make valuable [art and crafts], learning from the [artisans and collectors of the past].”