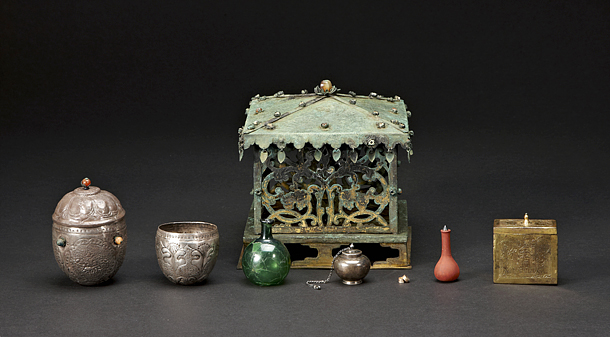 Name: Reliquaries from the Three-story Stone Pagoda of Bulguksa Temple

These objects, along with their outer casket, were found from the inside of a stone pagoda in Bulguksa Temple, Gyeongju in the course of the repair work on the pagoda in October 1966.

The objects contained in the sarira reliquary include a set of egg-shaped, silver-plated sarira inner/outer bowls, a gilt-bronze sarira bowl, the Pure Light Dharani Sutra, and several beads.

Known as the world’s oldest woodblock-printed scripture, the Pure Light Dharani Sutra was published in the mid-8th century.

The erosion of the paper had worsened in the 20 years since its discovery in 1966, but it went through improvement work in 1988 and 1989.

The scripture is believed to have been published around 751 when Seokgatap Pagoda, where it was found, was established during the renovation work of Bulguksa Temple.