How to pursue dialogue

How to pursue dialogue 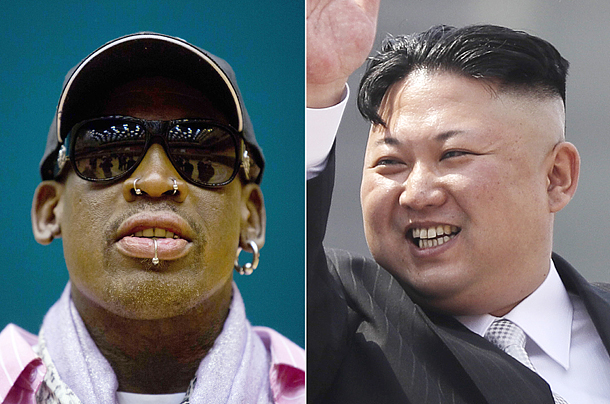 North Korean leader Kim Jong-un, right, is expecting another visit by former NBA basketball star Dennis Rodman, who has made several trips to the country but has been criticized for insensitive comments and for sending birthday greetings to Kim Jong-un in 2014. [AP/YONHAP]

President Moon Jae-in seeks to engage North Korea, reviving the “Sunshine” policies of Kim Dae-jung and Roh Moo-hyun, rejecting the hardline policies of President Park. But this sentiment comes at a moment when the U.S. and the international community are seeking to toughen UN Security Council sanctions and put maximum pressure on Pyongyang.

This runs the risk of not only confrontation with the Trump administration and new tensions in the U.S.-ROK alliance, but also undermining efforts to denuclearize the Korean Peninsula — and violating UN Security Council sanctions. If Moon reopens the Kaesong Industrial Complex, which sent some $50 million a year to Kim Jong-un’s coffers and Mt. Kumgang tourism, it will not lead to North-South reconciliation, but only more money to help fund Kim’s missile and nuclear program and a diplomatic train wreck when he meets with Donald Trump. Estimates are that over the past two decades, the ROK has sent some $7 billion to North Korea, with little to show for it.

President Moon is rightly as concerned about the threat from North Korea’s missile tests and nuclear weapons program as the U.S. is. But despite the fact that upon his election and initial offers to re-engage North Korea, Pyongyang’s response was a series of missile tests, not the hand of friendship, Moon appears to think that smiley face diplomacy will produce results that have been elusive since 1991.

Yet the past quarter century of diplomacy with North Korea shows that whether you are nice to them and shower them with goodies or are hostile and nasty, the result is the same: they are determined to obtain a sophisticated nuclear and missile capability. Think of then-Secretary of State Madeline Albright visiting Pyongyang or President Clinton meeting in the White House with top DPRK military leader Marshall Jo Myong-rok and signing a non-hostility communique. Or Kim Dae-jung showering Kim Jong-il with hundreds of millions of dollars. What evidence is there that more such friendly gestures will produce a different outcome? Albert Einstein defined insanity as doing the same thing over and over and expecting a different result.

That said, there is a smart way for the Moon administration to pursue North-South reconciliation without undermining either U.S.-led pressure diplomacy or risking tensions in the U.S.-ROK alliance. How? Simply, frame his Nordpolitik as “people-to-people” diplomacy and pursue it assertively.

What does this mean? It means that Seoul would continue to pursue policies designed to pressure Pyongyang to return to the Six Party negotiating table on a state-to-state basis.

But at the same time, offer sports, cultural and educational exchanges. Expand divided family visits. For example, Seoul could encourage universities and technical institutes to offer to train North Korean MBAs, lawyers, financial managers, accountants, tourism managers, agricultural specialists and other such occupations. This could be done outside a government framework by encouraging and incentivizing private institutions and NGOs.

Wait. You say, North Korea is a closed, brutal, tightly-controlled police state and they would never allow such North-South activities for fear of undermining the Kim family dynasty.

Probably so. But that is precisely the point. By demonstrating the ROK’s good will, Seoul would have the moral high ground, even if they do not accept Seoul’s hand of friendship and cooperation. We have already seen in recent weeks the offers of ROK NGOs being rejected by Pyongyang.

All this underscores a much larger truth, one that the Moon administration should take seriously: reconciliation, by definition, must be a two-way street.

Putting the sort of offers suggested here on the table — and leaving them on the table — puts the ball in Pyongyang’s court. Reciprocity need not be one-to-one or equal. But there must be some.

*The author is a senior fellow of the Brent Scowcroft Center for International Security at the Atlantic Council and its Foresight Strategy and Risks Initiative. He served as a senior counselor to the Underecretary of State for Global Affairs from 2001 to 2004, as a member of the U.S. Department of State Policy Planning Staff from 2004 to 2008, and on the National Intelligence Council (NIC) Strategic Futures Group, 2008-2012.