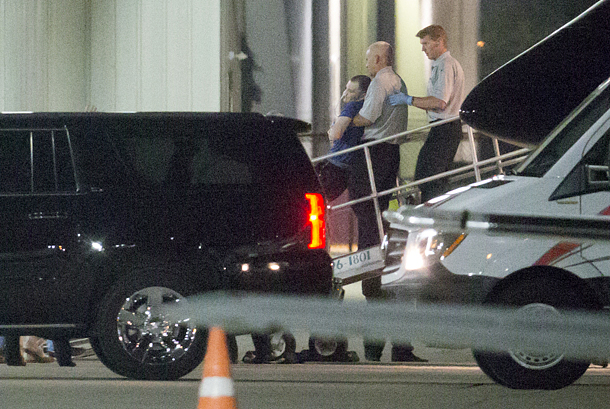 Otto Warmbier, a 22-year-old college student detained and imprisoned in North Korea, is carried off of an airplane at Lunken Airport in Cincinnati on Tuesday. Warmbier was released by North Korea, where he was serving a 15-year prison term with hard labor for alleged anti-state acts. [AP/YONHAP]

The 22-year-old American Otto Warmbier, who was arrested by North Korean authorities in January 2016 for attempting to steal a propaganda poster from a hotel, was flown back to his home in Cincinnati Tuesday night after 17 months.

“Otto has left North Korea,” his parents said in a statement to CNN. “He is on a Medivac flight on his way home. Sadly, he is in a coma and we have been told that he has been in that condition since March of 2016. We learned of this only one week ago.”

Warmbier was released “at the direction of the president,” Secretary of State Rex Tillerson said in a statement Tuesday, adding the department was continuing discussions with the North regarding three other American detainees.

“Out of respect for the privacy of Mr. Warmbier and his family,” said Tillerson, “we have no further comment.”

The Warmbier family said North Korean officials told the U.S. envoys that soon after his trial in March 2016, their son became sick with botulism, an illness caused by a toxin, and fell into a coma after being given a sleeping pill, according to the Post.

Warmbier’s release fell on the same day as former NBA star Dennis Rodman’s arrival in Pyongyang for unknown reasons, his fifth known visit to the North.

“Dennis Rodman had nothing to do with the release of Mr. Warmbier,” Heather Nauert, a State Department spokeswoman, was quoted as saying by the Post, adding that the U.S. government was “thankful” he would soon be home in his parents’ arms.

Warmbier was sentenced to 15 years of hard labor in March 2016 for subversion.

A student at the University of Virginia, he had flown to North Korea that January as a tourist.

During a government-arranged news conference in Pyongyang, which was held a month before the ruling was handed down, a tearful Warmbier pleaded for his release, saying he stole the banner because a member of his church offered to buy him a used car in exchange.

It was unknown whether he was forced to make any false statements. Kenneth Bae, an American who was detained for two years in the North from 2012, told the Korea JoongAng Daily last month he was forced to confess his crime and also to fabricate some parts of his story.

The three other U.S. citizens detained in North Korea are Kim Hak-song, an agricultural researcher at Pyongyang University of Science and Technology; Tony Kim (aka Kim Sang-duk), an accounting teacher from the same school; and Kim Dong-chul, a businessman. They all are American citizens of Korean ethnicity.