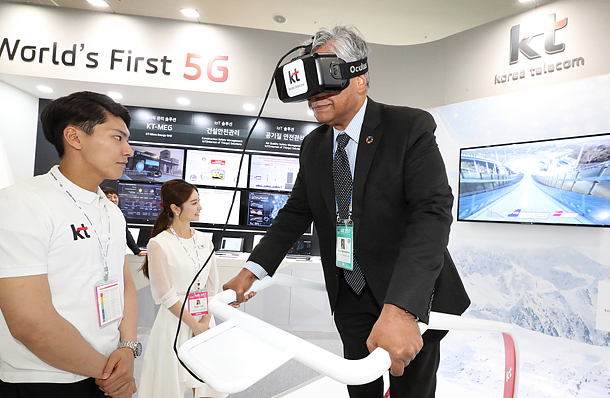 Korea, Japan and China are in a battle to develop fifth-generation speedy mobile networks as hyper-connectivity becomes the basic infrastructure for the fourth industrial revolution.

The fifth-generation network, or 5G, has data transmission speeds exceeding 20 gigabits per second, which is at least 20 times faster than the current fourth-generation or LTE (long-term evolution) network. The network will bring an era where consumers can download a 2.5 gigabyte ultra high-definition movie in just a second.

Korean companies KT and SK Telecom have already announced goals to commercialize the fifth generation high-speed network by 2019, faster than any other mobile carriers in the world, while companies in Japan and China have also released investment goals of over 50 trillion won ($44.1 billion) to develop 5G networks and infrastructure.

Japanese media Nikkei Asian Review reported Wednesday that the three top carriers of Japan - NTT Docomo, KDDI and SoftBank Group - are expected to invest a combined 5 trillion yen ($45.7 billion) in developing 5G services. The initial aim is to commercialize 5G connection in Tokyo and limited areas in time for the 2020 Tokyo Olympics. Nationwide commercialization by at least one of the carriers is expected in 2023.

While the amount of investment is less than the 6 trillion yen they spent to install the 4G LTE network, the mobile carriers are considering sharing 5G stations to cut costs in building a 5G infrastructure. Also, some 4G base stations can simply be converted to 5G, according to the newspaper.

Major Chinese telecom service providers, including China Mobile Communications, China Unicom and China Telecom are also expected to spend about 300 billion yuan ($43.6 billion) by 2020 for nationwide 5G connection as the country set 5G commercialization as one of its state goals last year. China Mobile is expected to lead conversion from 4G to 5G in connection with more than 40 global companies including Ericsson, Nokia and Huawei Technologies.

KT and SK Telecom haven’t disclosed the amount of investment, but it is assumed they are putting big capital into the next generation network.

KT is the official network partner for the PyeongChang Winter Olympic Games next year in Korea. It will offer 5G trial services during the Games. In February. KT has succeeded in pilot tests of various 5G-based services such as Sync View, which will provide real-time video broadcasts from the perspective of the athlete in bobsleigh races. By September, the mobile carrier will also set up 5G test networks in PyeongChang, Jeongsun and Gangneung where games will take place as well as in Seoul.

“KT is the only telecom company that has the chipset, device, system and service to prepare for a 5G-based Olympic Games,” said Oh Sung-mok, president of KT’s network division. “The PyeongChang Olympics will be an important milestone for KT to become a global operator.” Recently, KT was awarded the “Best Network Developer” at TechXLR8(Technology Accelerator 8) hosted by Informa Telecom&Media, a global ICT research institute in 43 countries. KT was recognized for its leadership in the current LTE market as well as for strides in developing the 5G network.

The nation’s largest mobile carrier SK Telecom was also recognized as “Best 5G Trial Between an Operator and Vendor.” The carrier’s 5G network-based car dubbed T5 developed with global network equipment provider Ericsson was awarded. The company has showcased test drives of the internet-connected car in Incheon’s Yeongjong Island, where it established a 5G test network, in November.

For a head start in 5G commercialization, the carrier launched a so-called 4.5G service this month, which it says is faster than 4G and an early stage of 5G, in limited areas of Korea.