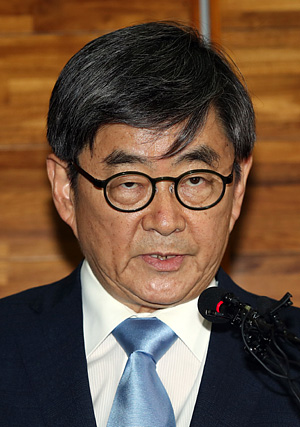 Ahn Kyong-whan, the nominee for justice minister, at a press conference Friday at Korea Legal Aid Corporation in Seocho-dong, southern Seoul, apologizes for various breaches, including forging a woman’s signature on a marriage registration without her knowledge. [YONHAP]

Ahn Kyong-whan, the nominee for justice minister, said Friday that he would strive toward prosecution reform should he be given the opportunity, while saying he has no intention of withdrawing from his nomination amid opposition.

The 69-year-old former chairman of the National Human Rights Commission held a press conference Friday at the Korea Legal Aid Corporation in Seocho-dong, southern Seoul, to apologize for various breaches, including his counterfeit marriage 42 ago and accusations that he used his influence at his son’s high school.

“For some 70 years, I have lived as a scholar, a writer, but should the opportunity be provided to me, I will definitely fulfill the people’s expectations of reforming the prosecution and the Justice Ministry, which I consider my final calling,” said Ahn, a professor emeritus of law at Seoul National University.

On Thursday, it was revealed that Ahn, as a 27-year-old, had forged the seal of a woman he had been dating and submitted a marriage registration in December 1975 without her knowledge.

The woman, surnamed Kim, found out the next year and the marriage was nullified, according to court records.

According to the Seoul Family Court’s ruling from March 11, 1976, Ahn claimed he had thought that if he registered their marriage, Kim would eventually fall in love with him.

Ahn described the counterfeit marriage registration as a “big mistake committed in the days of my youth, in my mid-20s.”

He added, “I committed a truly egregious mistake against the person I loved and her family, blinded by my own selfishness. This act, which is too shameful to put into words, was fully a mistake I committed that cannot be excused. Since then, I have lived regretting and repenting for it. I have never for a moment forgotten the mistake of that time.”

Responding to a reporter’s question, Ahn said that he had not been asked about this issue by the Blue House ahead of being named for the post and had been queried less than a week ago.

However, he did not confirm whether he was questioned by the Blue House civil affairs office.

Ahn was named by President Moon Jae-in to head the Ministry of Justice last Sunday and will face a confirmation hearing in the National Assembly in less than two weeks. His nomination is unconventional as he has never served in the prosecution.

Ahn was named as head of the National Human Rights Commission in October 2006 by then President Roh Moo-hyun and stepped down from the post in July 2009 to protest the conservative Lee Myung-bak administration’s decision to downsize the human rights watchdog.

He told reporters that the counterfeit marriage registration issue had been previously clarified in 2006 ahead of his appointment as the head of the rights commission.

“There was no time that I intervened in the process or exerted my influence,” he continued.

He added he had merely complied with the school’s request for the parent to submit a petition alongside the student’s letter of apology as a part of disciplinary action.

Ahn said that he submitted the letter “with the feeling of a shamed and wretched father” and that he had asked for “his son to be strictly punished under school regulations but for the utmost consideration to be granted for the other student.” He said he could reveal the petition he had written the school if needed.

He said, “I had no intention of belittling women in any of my writing, and I myself as one man wanted to provide an opportunity to reveal the nature and desires of a man calling for introspection and self-reflection for fellow men. I am beyond sorry that I have to speak on my own faults as well as an issue with my child.”

He acknowledged that his past mistakes were his own fault and that he would never forget them until the day he dies.

But he also added, “I have no intention of stepping down until the confirmation hearing.”